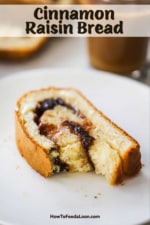 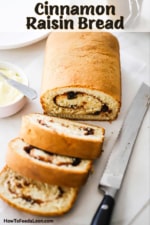 Homemade bread of any kind is just amazing. Throw in some cinnamon and raisins and you’ve just raised the bar.

We love all kinds of bread, including homemade country white, focaccia with rosemary and olive oil, homemade dinner rolls, and zucchini bread. This swirl loaf is so easy to make and the smell that will fill your home while it bakes is heavenly. 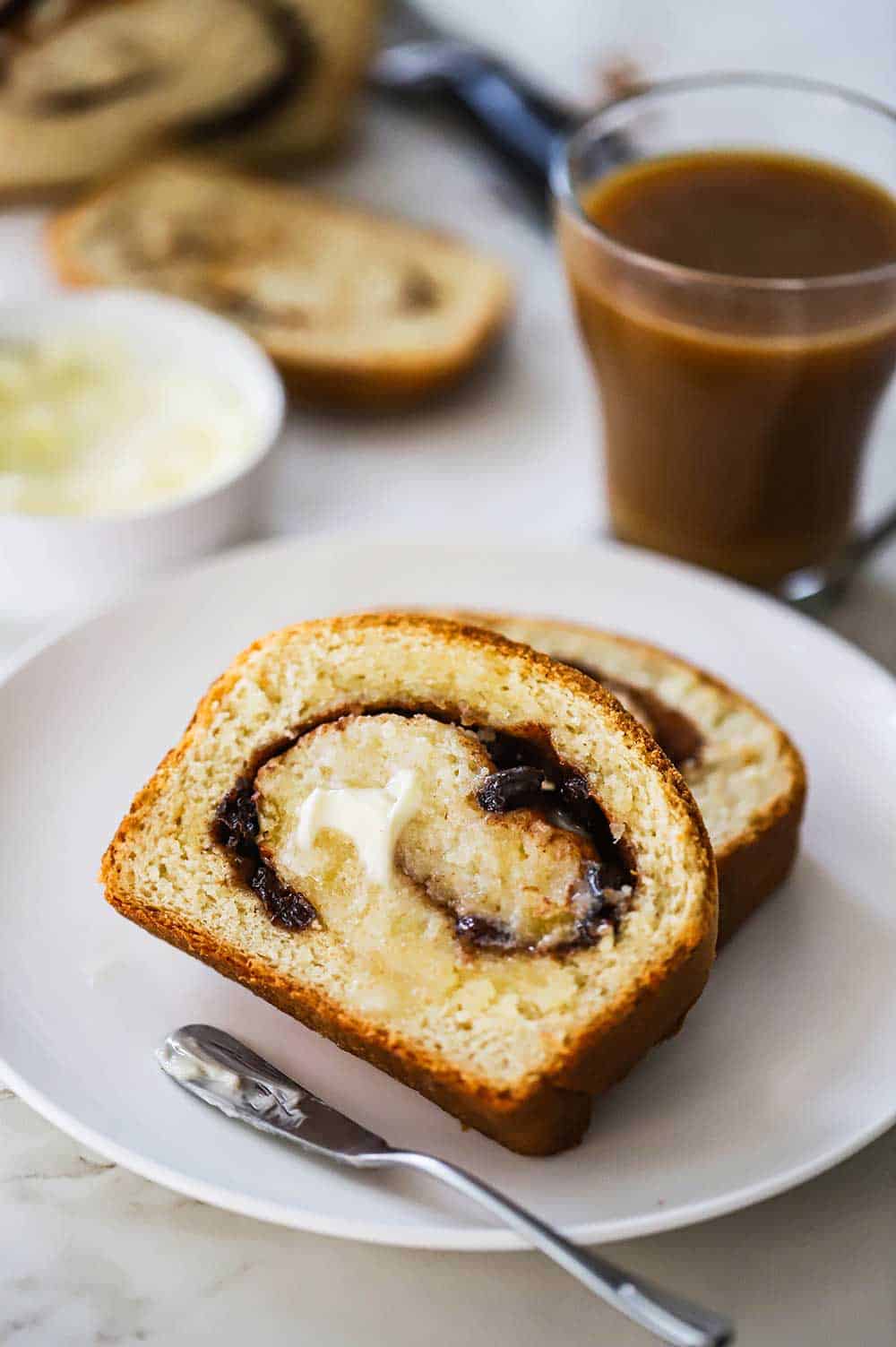 The ingredients are straightforward and the technique is not really challenging for this bread.

One thing you do need is some time. The bread will proof (rise) twice, and this can take 1 to 2 hours for each proofing.

But the wait is so worth it!

NOTE: If you liked this video, please subscribe to our YouTube channel. Remember to click the little ‘bell’ icon so you’ll never miss a new video! Thank you very much!

The Ingredients You Will Need

Water – Warmed in the microwave to 105°F to 115°F
Yeast – Quick rise or Active will work just fine (Quick rise, as you would imagine, rises faster).
Whole milk – Warmed in the microwave to 105°F to 115°F
Sugar – You’ll need some for the bread and some for the swirl filling
Unsalted butter – Room temperature
All-purpose flour – You could also use bread flour
Salt – Kosher or fine sea salt works great
Cinnamon – Go with good quality ground
Raisins – You could make this bread without raisins, but they add amazing taste and texture

EXPERT TIP: Roll the risen dough out on a lightly floured surface to a 9″x9″ square. After rolling it up, jellyroll style, it will fit perfectly in your greased 9″x5″ pan. 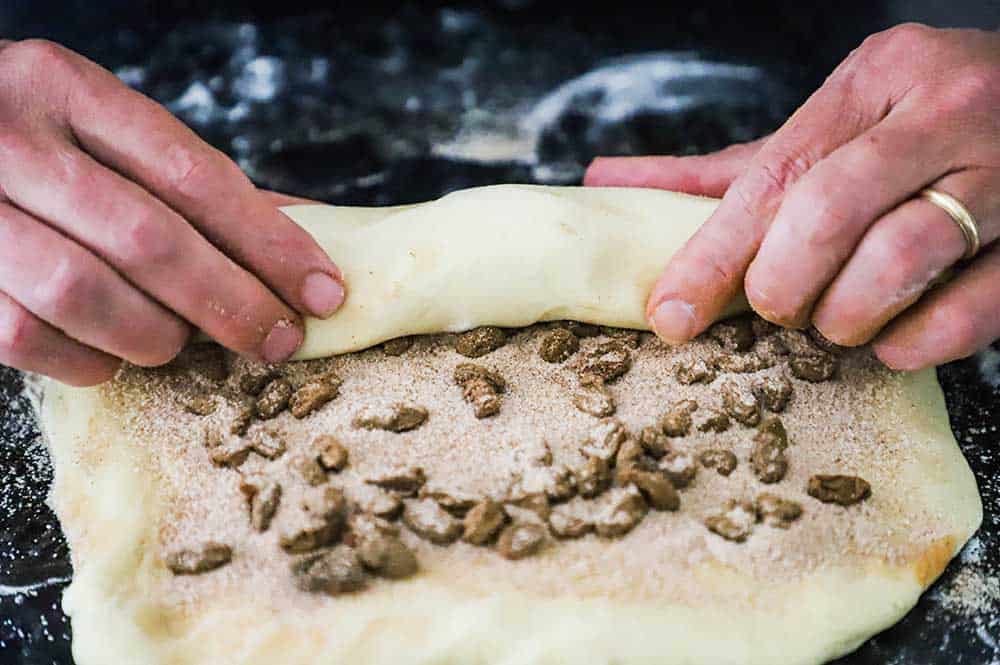 Let the Dough Rise – One of the most important steps in making bread is to give the dough enough time to rise and double in size. You’ll want to place the dough in a non-drafty area covered with plastic wrap or a kitchen towel. It may only take 1 hour to double in size, but it could take as long as 2½ hours. You need to be patient! You can make the dough the night before baking – place the dough in an oiled bowl, cover it with plastic wrap, and place it in the fridge until the next morning.

Roll the Dough Tightly – After you’ve added the cinnamon raisin filling to the square dough, use your fingers to roll the dough tightly. A loose roll will cause the bread to spread apart from itself as it bakes.

Cook the Bread Completely – The exterior of the bread will turn a golden brown as it bakes. When you tap on the top of the bread, it should sound hollow. If you remove the bread too early, the inner portion of the swirl won’t completely bake and be very doughy.

EXPERT TIP: Brush melted butter over the top of the risen loaf. It will add a beautiful golden hue to the bread and, of course, add a wonderful buttery taste. 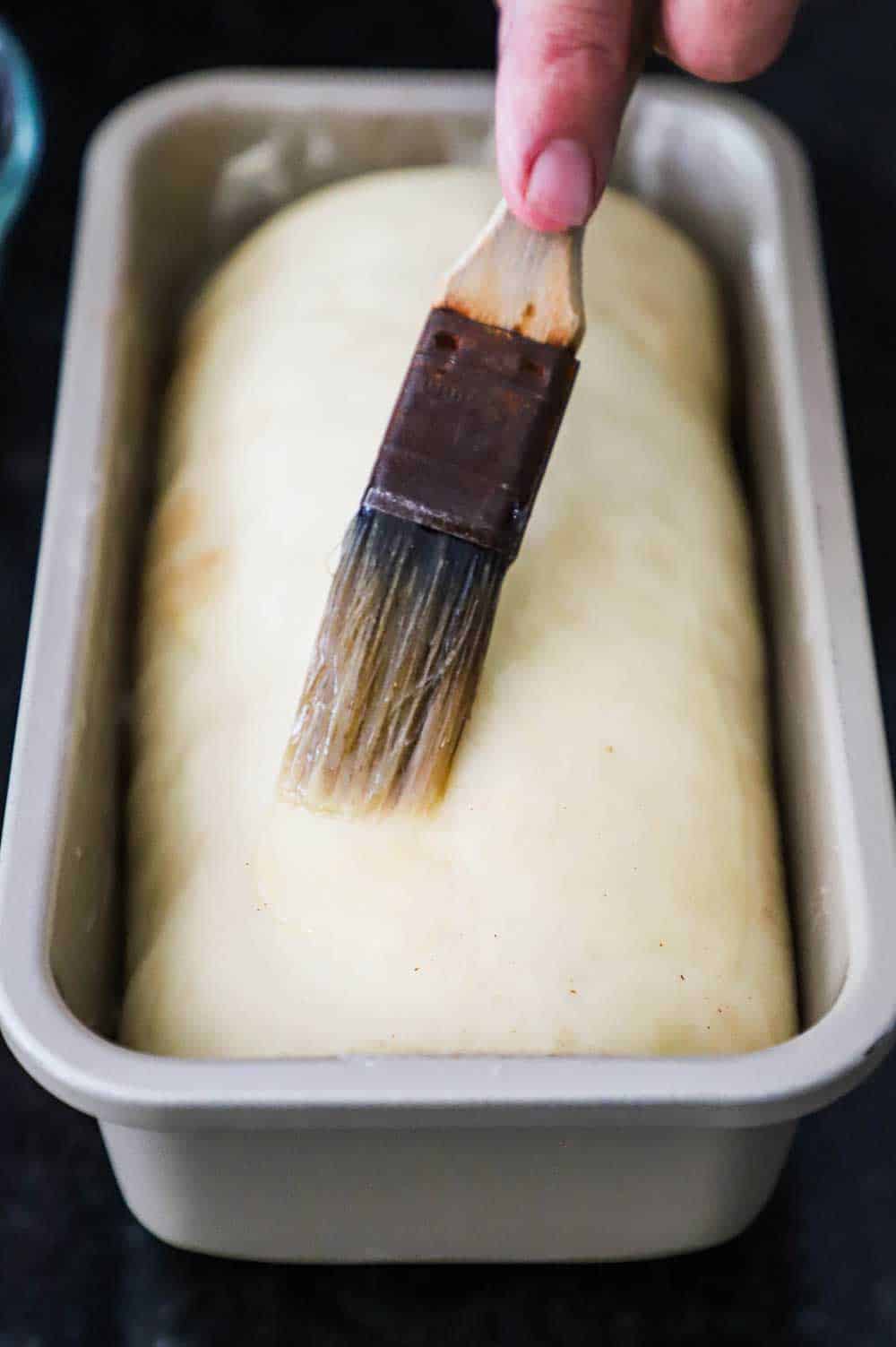 Other Amazing Baking Recipes To Try

We love this cinnamon raisin swirl bread so much. Here are some other baking recipes that you will love to try:

But in the meantime, you’ve got to whip up some of this amazing cinnamon raisin swirl bread! 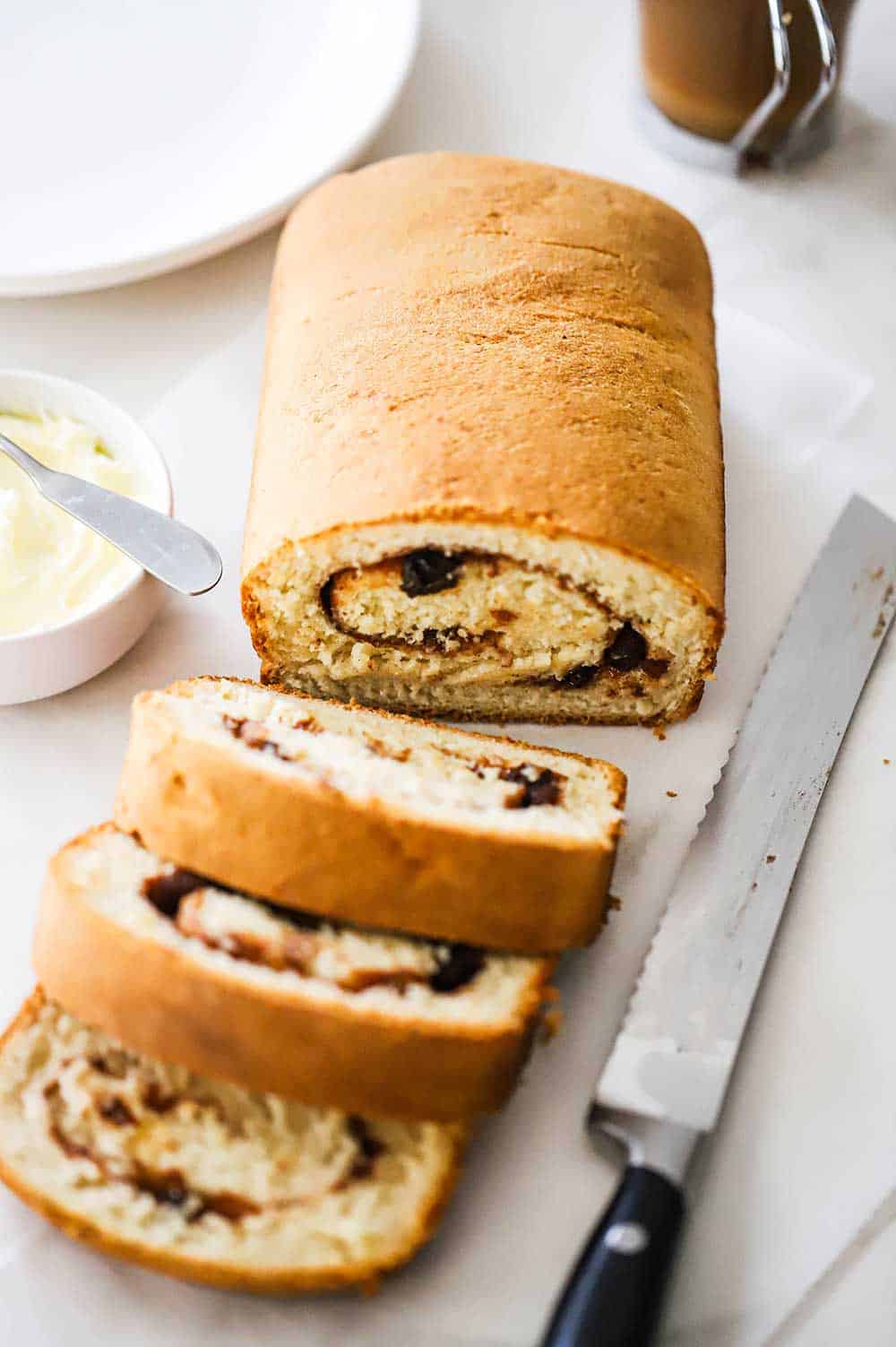 There is something about the process of making bread, and then eating that homemade bread that is just so comforting.

You take a handful of modest ingredients and transform them into something magical.

And then that first bite. A little piece of heaven (with butter on top!). Absolute perfection. 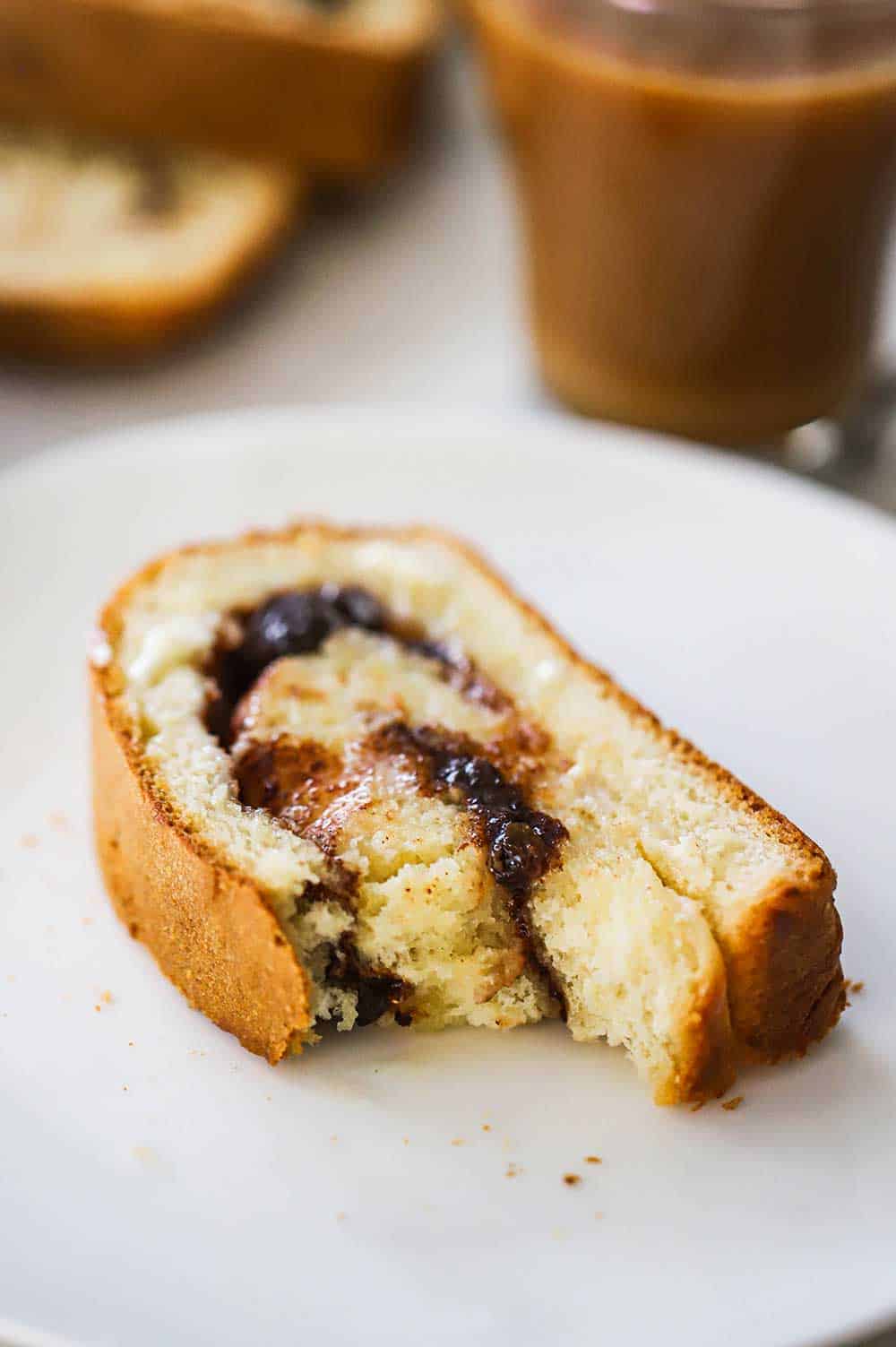 Ready to make your kitchen smell like an amazing bakery? Go for it!

And when you do, be sure to take a photo of it, post it on Instagram, and tag @HowToFeedaLoon and hashtag #HowToFeedaLoon! 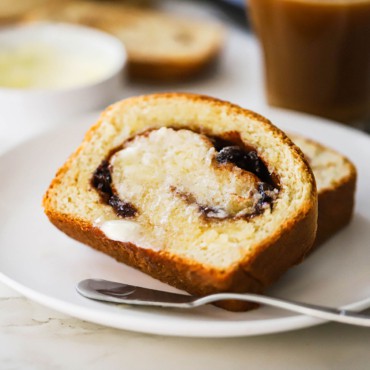 See the video near the top of the blog post for visual guidance. If you liked the video, please subscribe to our YouTube channel.  Don't let the water or milk get too hot, otherwise, it will kill the yeast.  The bread will keep at room temperature, wrapped in plastic, for up to 5 days. It freezes nicely for up to 1 month. Reheat slices for a few seconds in the microwave, if desired. Softened butter is amazing on the warm bread.