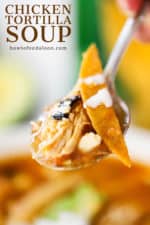 This extremely comforting soup has been a favorite in our house for many, many years.

The chicken, ancho chiles, and avocado, mixed with the crispy corn tortillas, and the deep flavors of the homemade chicken broth…come together to make the most satisfyingly delicious soup. So good! 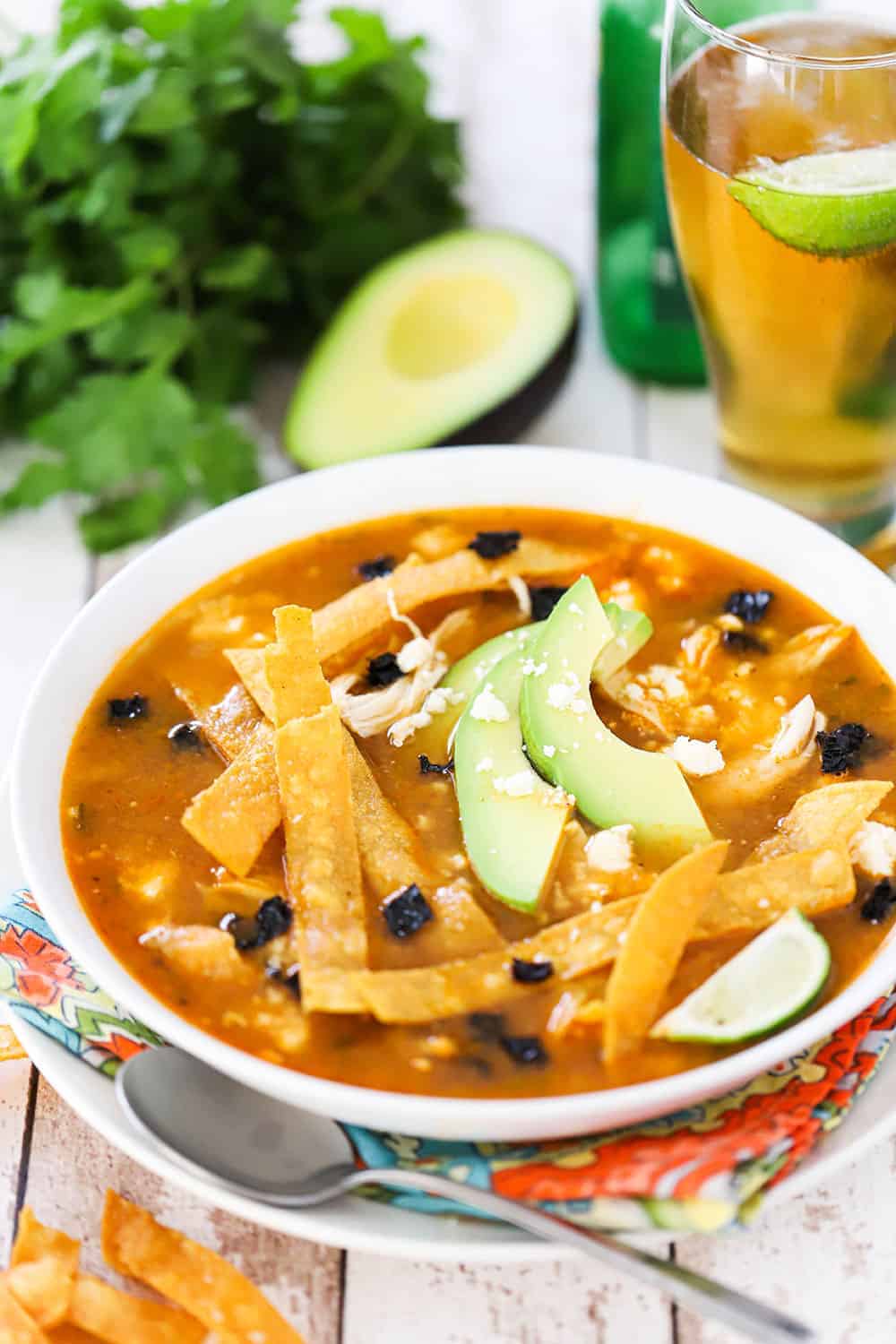 How To Make Chicken Tortilla Soup

This soup is really not difficult to prepare at all, and much of it can be made in advance.

It can also easily be adapted to your own tastes.

The most important element isn’t tortillas, although it wouldn’t be tortilla soup without them. The real key to making the best chicken tortilla soup recipe is quality chicken broth. More on that later.

Now, as mentioned, there are several components to this soup that can be made in advance.

The tortilla strips add such a wonderful taste and texture to the soup and can be made up to several days in advance.

EXPERT TIP: Frying up the strips is really easy. Simply get yellow or white corn tortillas and use a sharp knife or pizza cutter to cut the strips. Drop them into hot vegetable oil (350°F) until golden and crispy, about 1 to 2 minutes. Sprinkle with a little salt as soon as they come out of the oil. Alternatively, you can bake them in a 350°F oven. Simply brush a little olive oil on the strips and bake them for 10 minutes, toss them around a little, and then bake for another 5 minutes, until golden. 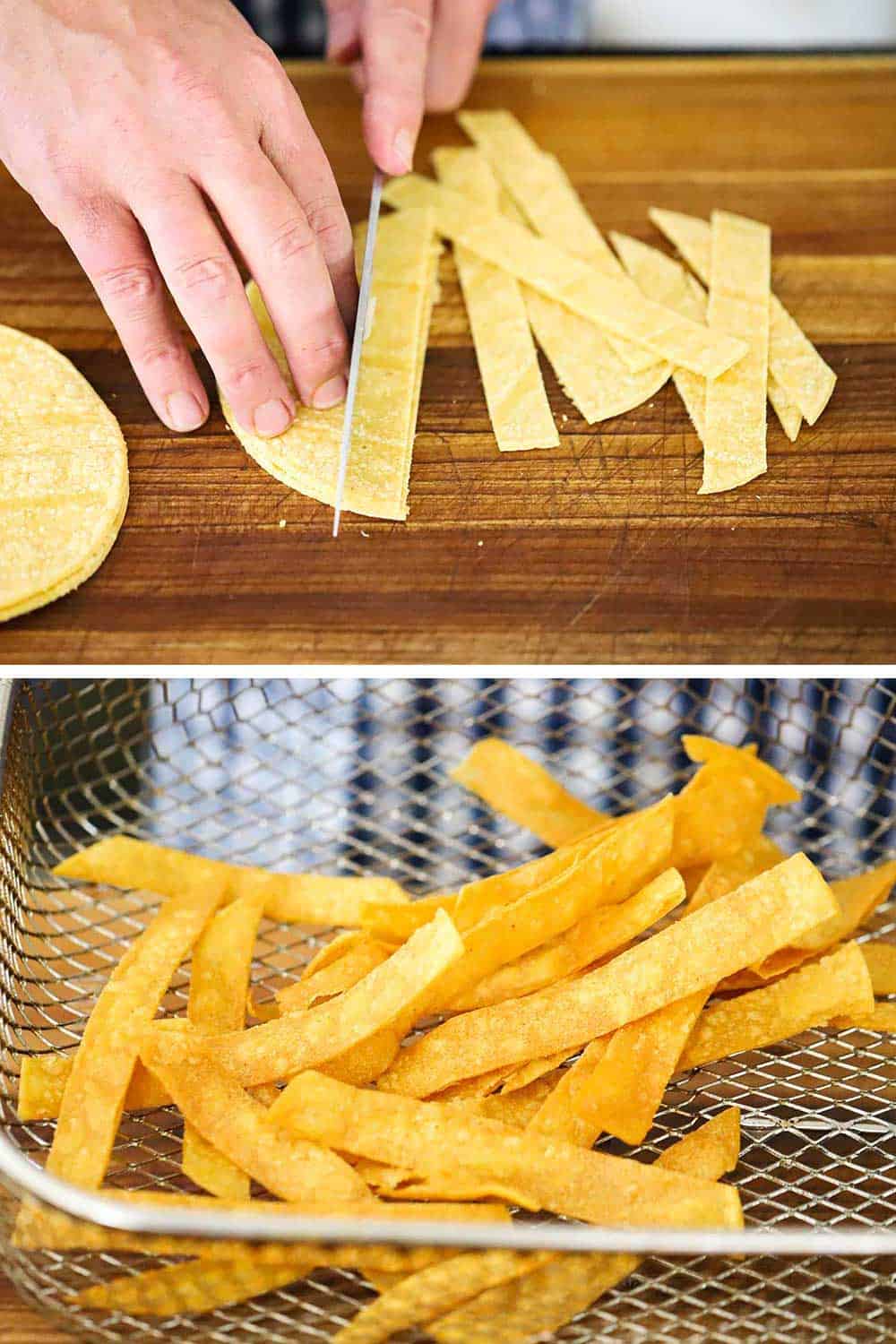 What to Serve with Chicken Tortilla Soup

In addition to the tortilla strips, we love the addition of seared ancho chili bits to deepen the flavor.

Ancho chiles are dried poblanos and pack medium-low heat. They can be found in the Mexican section of many well-stocked supermarkets, Mexican food markets, or ordered online.

Other wonderful garnishes for the soup include avocado, Mexican fresco cheese, Mexican crema (or sour cream), and chopped cilantro.

To prepare the ancho chili, simply cut off the stem, cut the pepper open, lengthwise, and remove the seeds. Then heat a skillet and sear the pepper for about 30 seconds to a minute. Then, use a knife to cut them into small pieces. 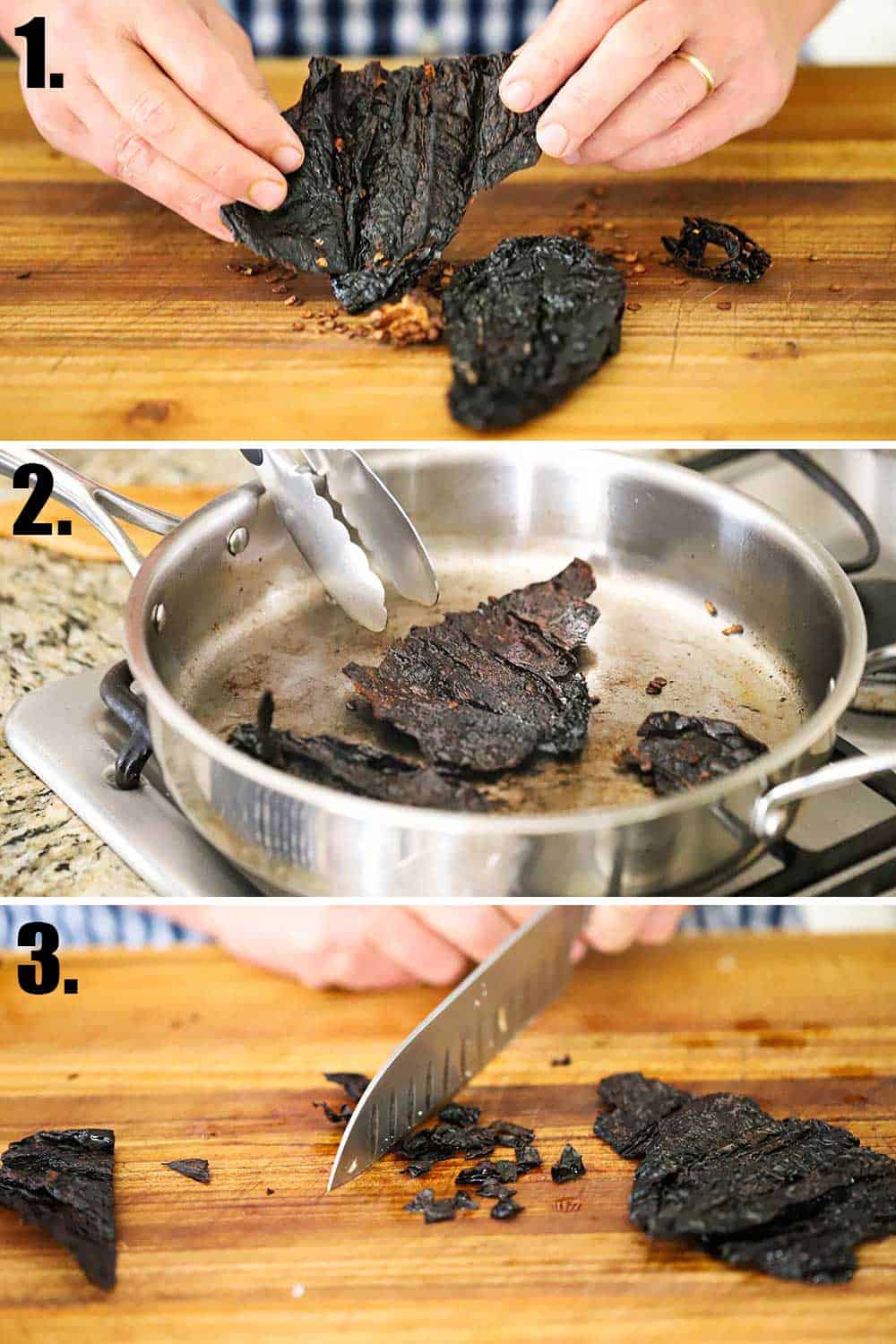 Roasting the tomatoes concentrates the flavor and adds a depth of flavor that is just amazing.

EXPERT TIP: Do be careful when roasting the tomatoes. We find that 40 minutes softens the tomatoes just perfectly, but keep an eye on them. If your oven runs hot, it could burn the tomatoes. They should be extremely soft and just starting to brown on the edges. A baking sheet lined with foil makes clean up easy. 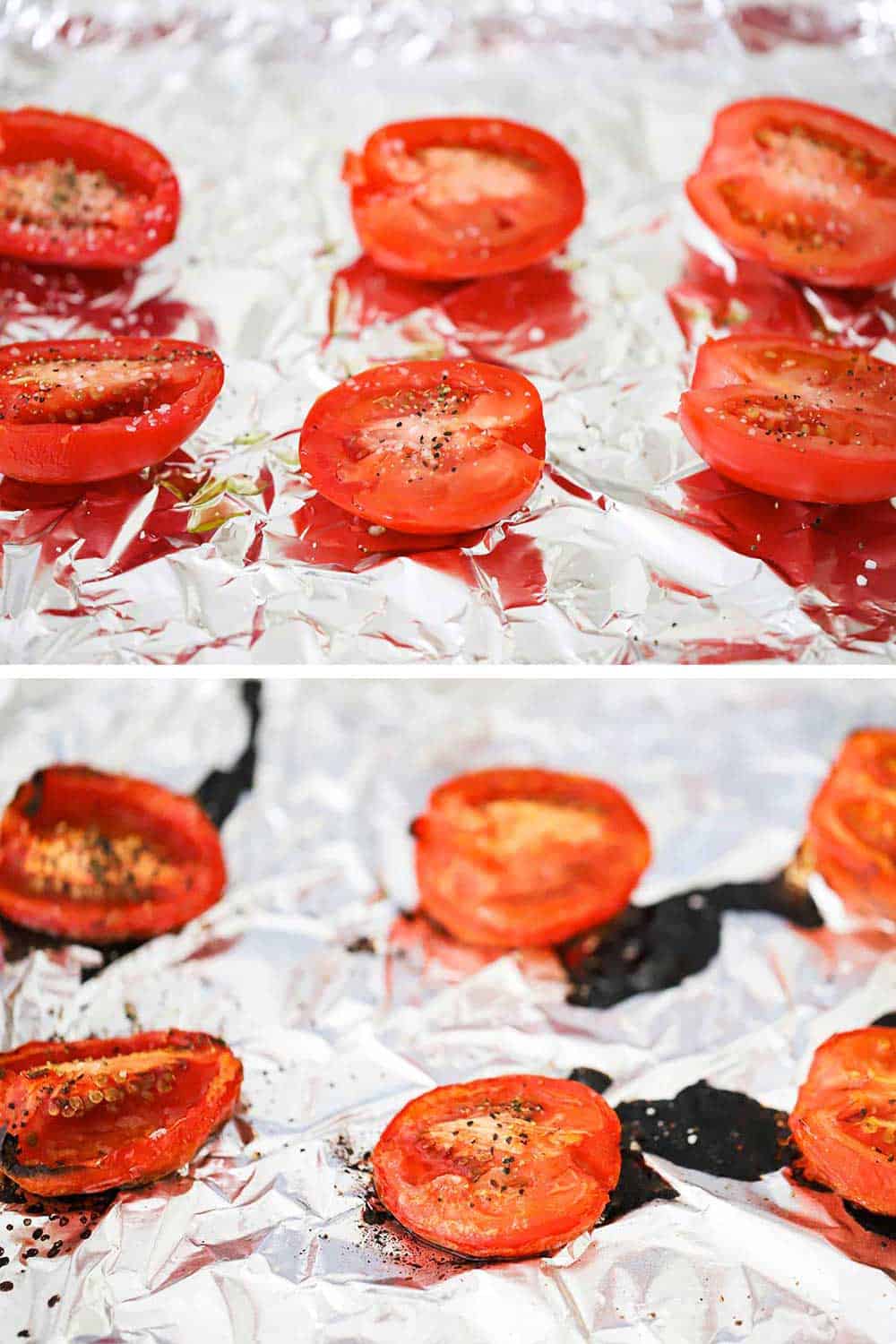 White onion and fresh garlic are key ingredients, too.

We peel the onion and then quarter it.

Heat 1 tbsp of olive oil in a large skillet over medium-high heat along with the onions pieces and whole garlic cloves and cook until starting to brown, about 10 minutes. 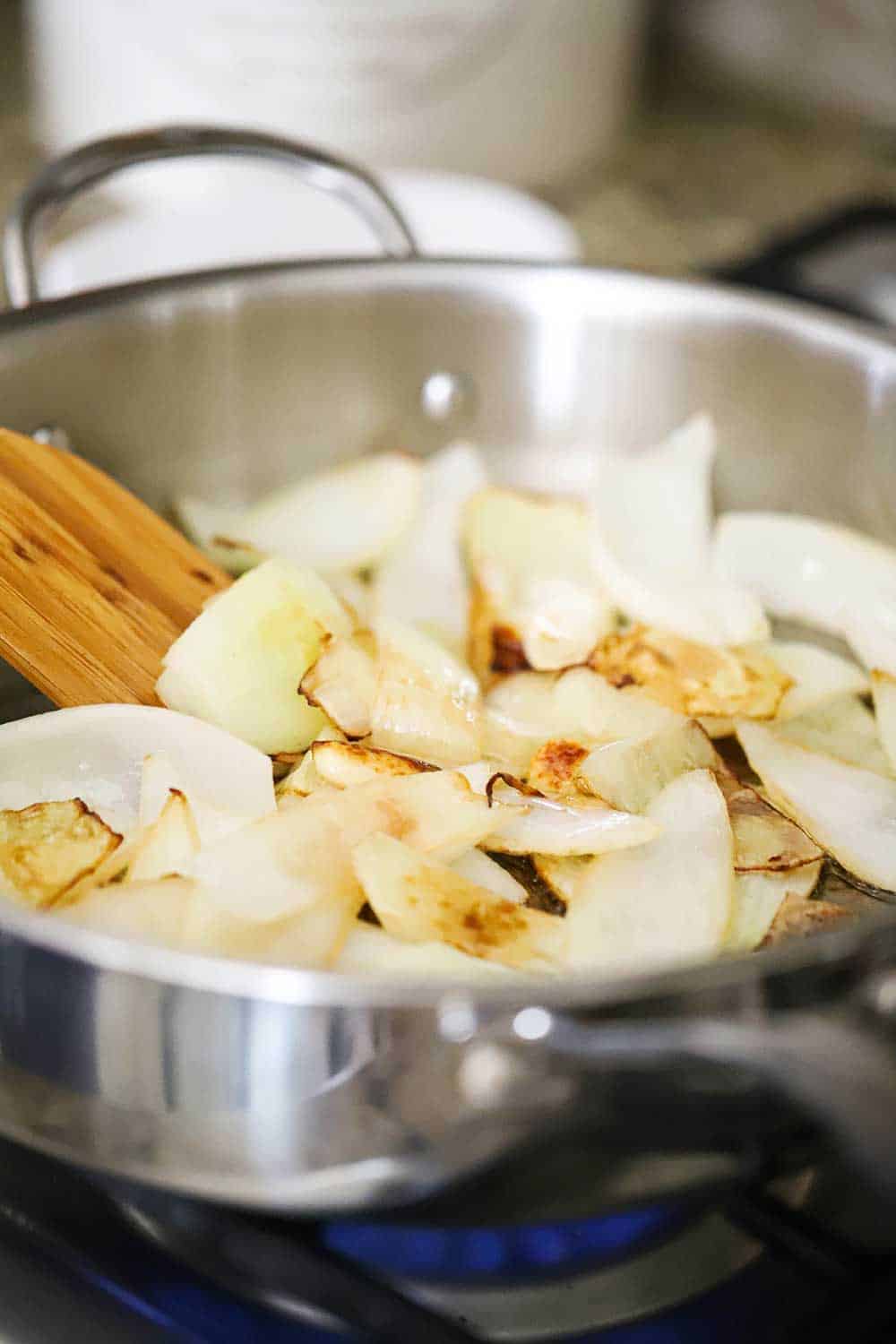 Carefully transfer the roasted tomatoes and seared onions and garlic to a blender or food processor.

Pureíng the vegetables will create a smooth base for the soup that adds a depth of flavor and texture that is ideal.

EXPERT TIP: For an almost silky texture, you can strain the liquid through a fine-meshed sieve. While this does make the final soup a bit thinner and very smooth, we like a little texture in the soup, so we don’t strain the pureé, but again, it’s a matter of taste. 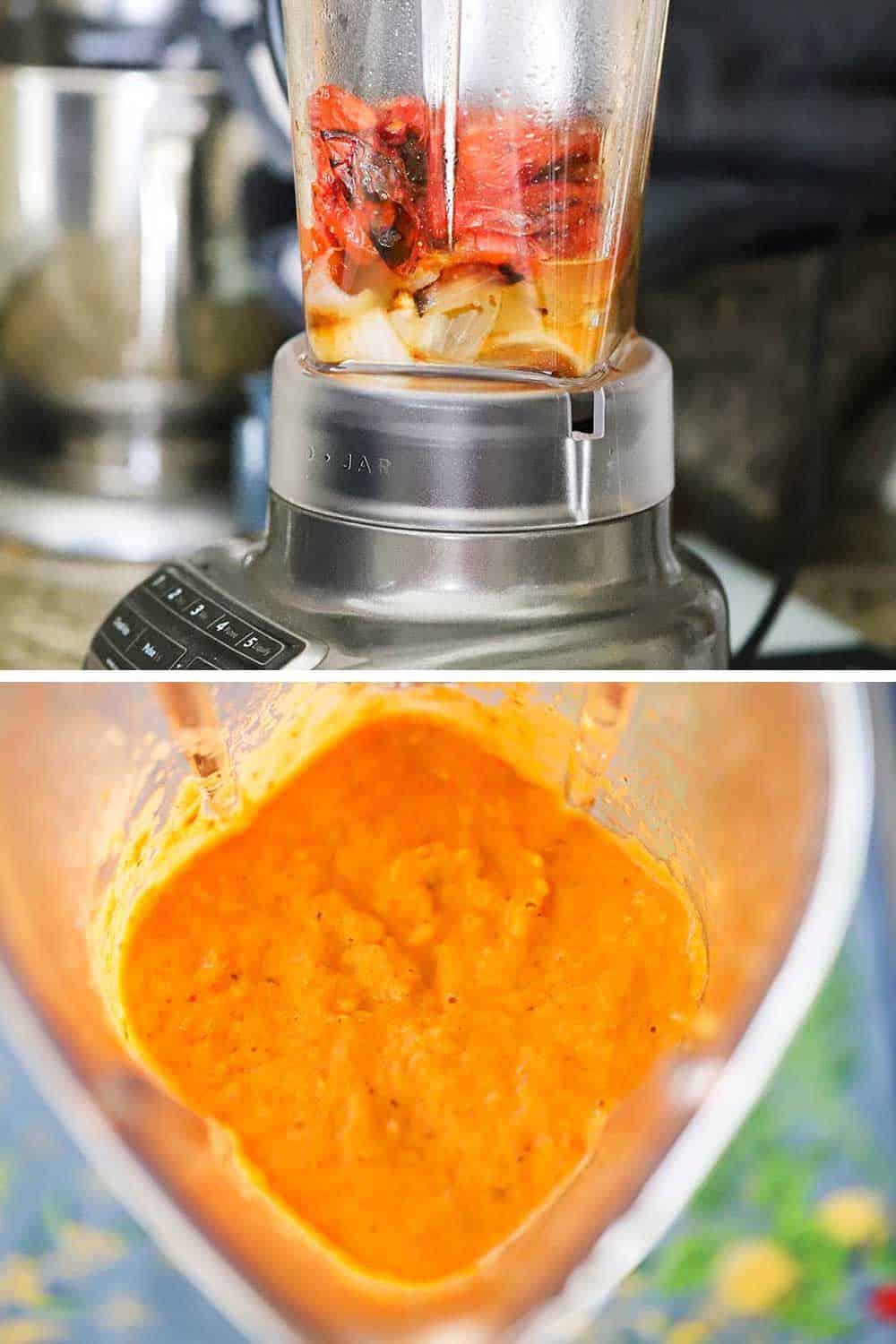 Transfer the pureéd vegetables back into the large skillet and cook over medium-high heat until reduced almost to a paste, about 10 minutes.

Now, it’s time to stir in the homemade chicken broth and cilantro and let it simmer for 30 minutes. 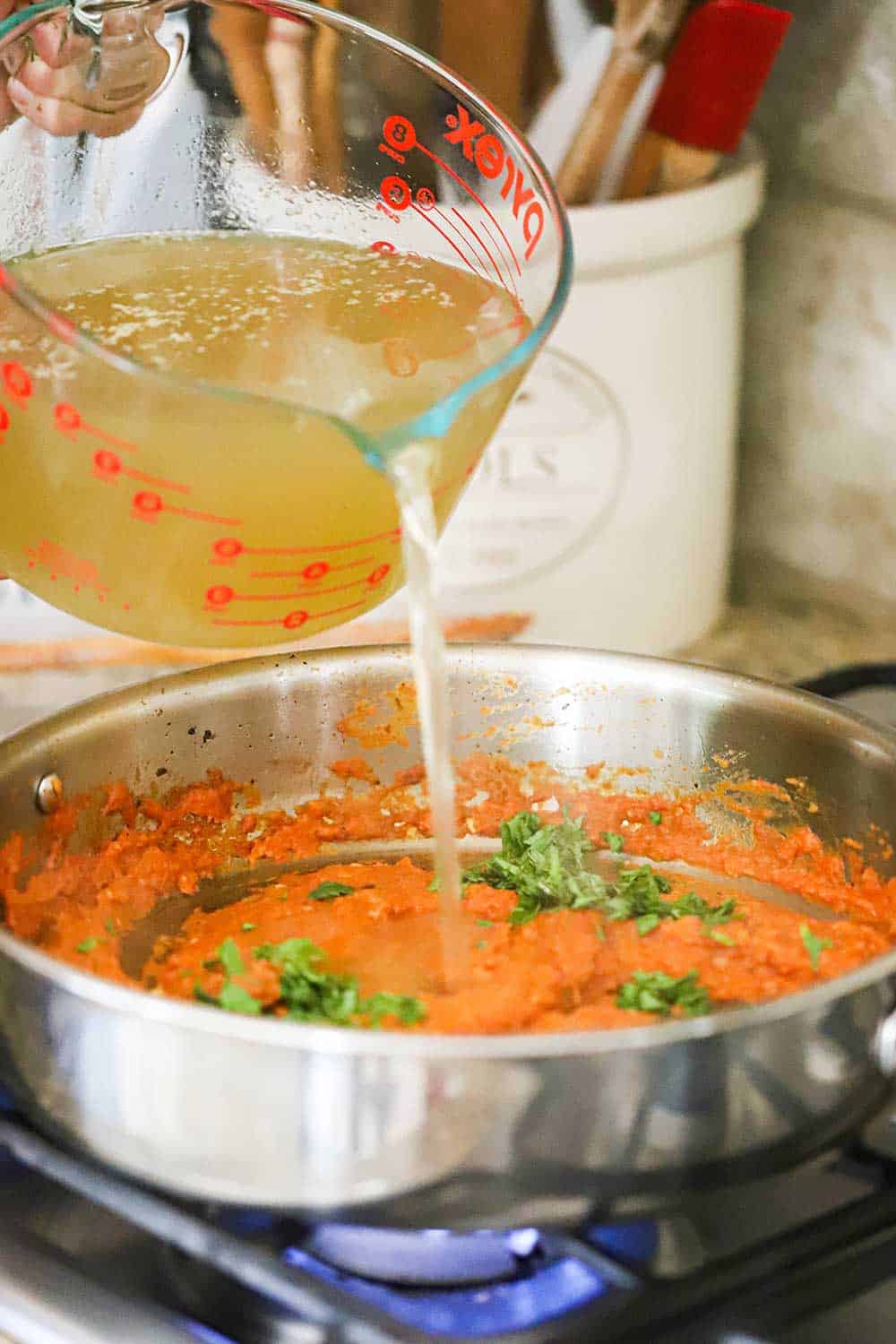 How To Cook the Chicken

You could absolutely use the meat from a rotisserie chicken from the supermarket with no problem for the soup.

But we have a trick that really is just as easy and helps to flavor the soup even more. 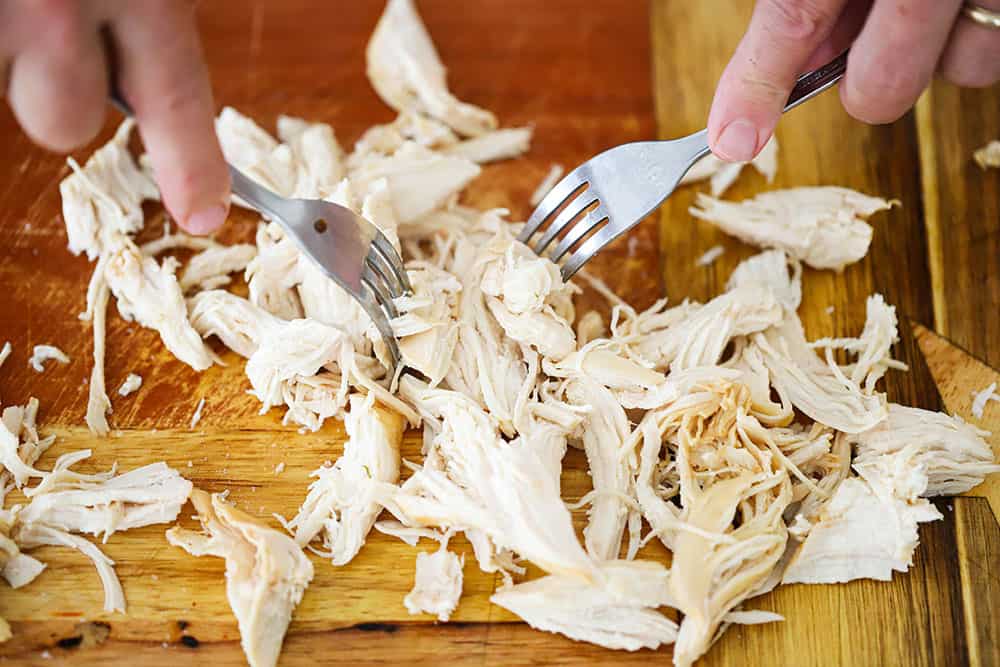 When To Serve Chicken Tortilla Soup

It’s the perfect start to a Mexican-themed dinner party including:

Or, pour yourself a big bowl of the soup for the perfect go-to lunch. 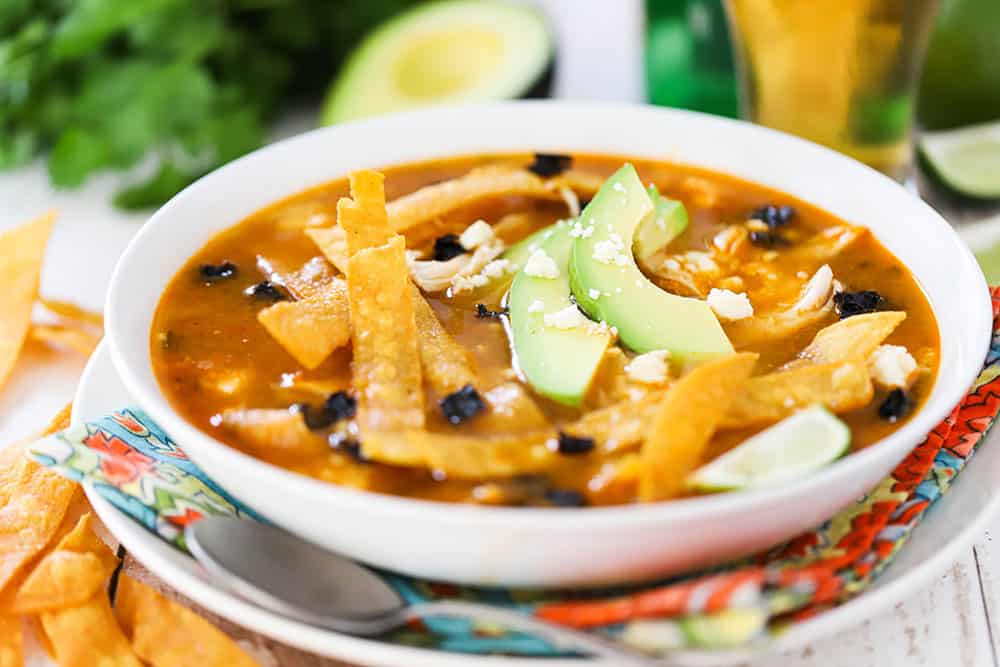 There is something about homemade chicken tortilla soup that just makes you feel good.

Deeply flavorful and warming, it’s one of our most favorite soups of all time.

Mmmmmm….and when it’s simmering on the stove, the smell is heavenly. 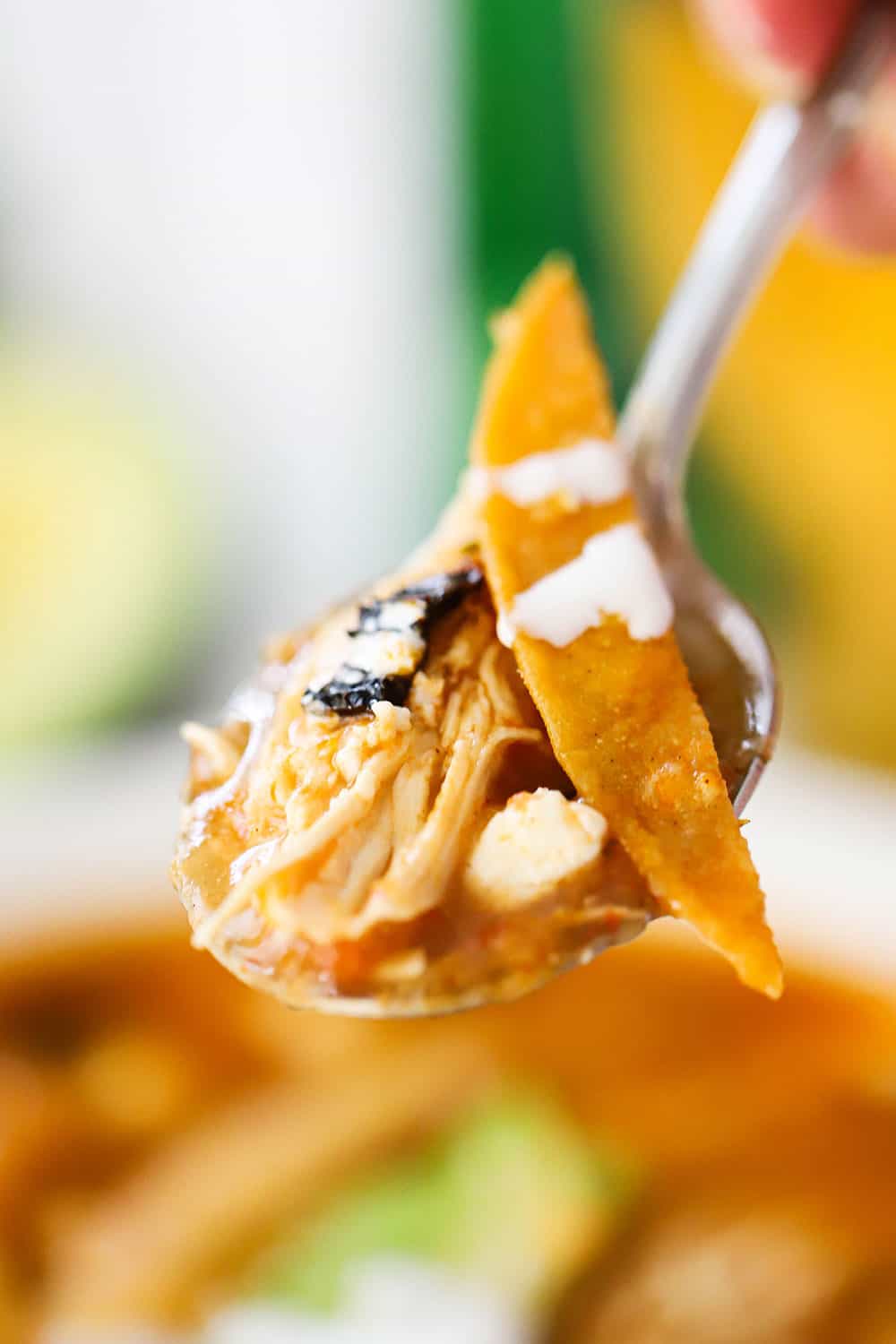 Ready to make the best soup this side of the Rio Grande? Go for it! 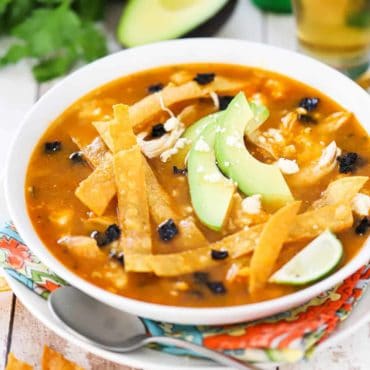 Chicken Tortilla Soup is one of the most comforting soups ever. It's not difficult to prepare, and many of the components can be made in advance. This is a soup where the base is the most important element, namely the broth. Go with homemade, if possible (link in recipe).
5 from 1 vote
Print Pin Rate
Course: Appetizer or Soup
Cuisine: Mexican / TexMex
Keyword: how to make chicken tortilla soup, tortilla soup recipe, what is tortilla soup?
Prep Time: 20 minutes
Cook Time: 50 minutes
Total Time: 1 hour 10 minutes
Servings: 8 people
Calories: 198kcal
Author: Kris Longwell

Fry the Tortillas (Can be done in advance)

Prepare the Ancho Chilies (Can be done in advance)

Fry the corn tortillas strips in a deep-fryer, or sturdy skillet filled with about a ½-inch layer of vegetable oil.  Alternatively, you can brush the tortilla strips with olive oil and then bake them in a 350°F oven for 10 to 15 minutes, tossing them once midway.  Lightly salt. Any type of dried Mexican chili will work in place of the ancho.  Just check the heat-level first.  Some chili's carry quite a bit of heat.  Ancho chilis are mild.  If you want a spicier soup, then split a fresh jalapeno pepper down the middle and remove some of the seeds.  Roast them with the tomatoes and then add them to the blender when pureíng.  We strongly recommend making the chicken broth from scratch.  You can use the chicken for the soup! The soup will keep in the refrigerator for up to 1 week and freezes beautifully for up to 2 months.

POST UPDATE: This recipe was originally published in January 2015, but was updated with improved tweaks to the recipe with new tips and photography, and a fabulous new video in October 2020!