Farm Fresh Corn Chowder pretty much says it all.

In a word: Comfort. In two words: Comfortingly delicious.

This chowder is wonderful anytime of the year, but when corn is at its peak, this is about the best soup you’ll ever try (and make!). 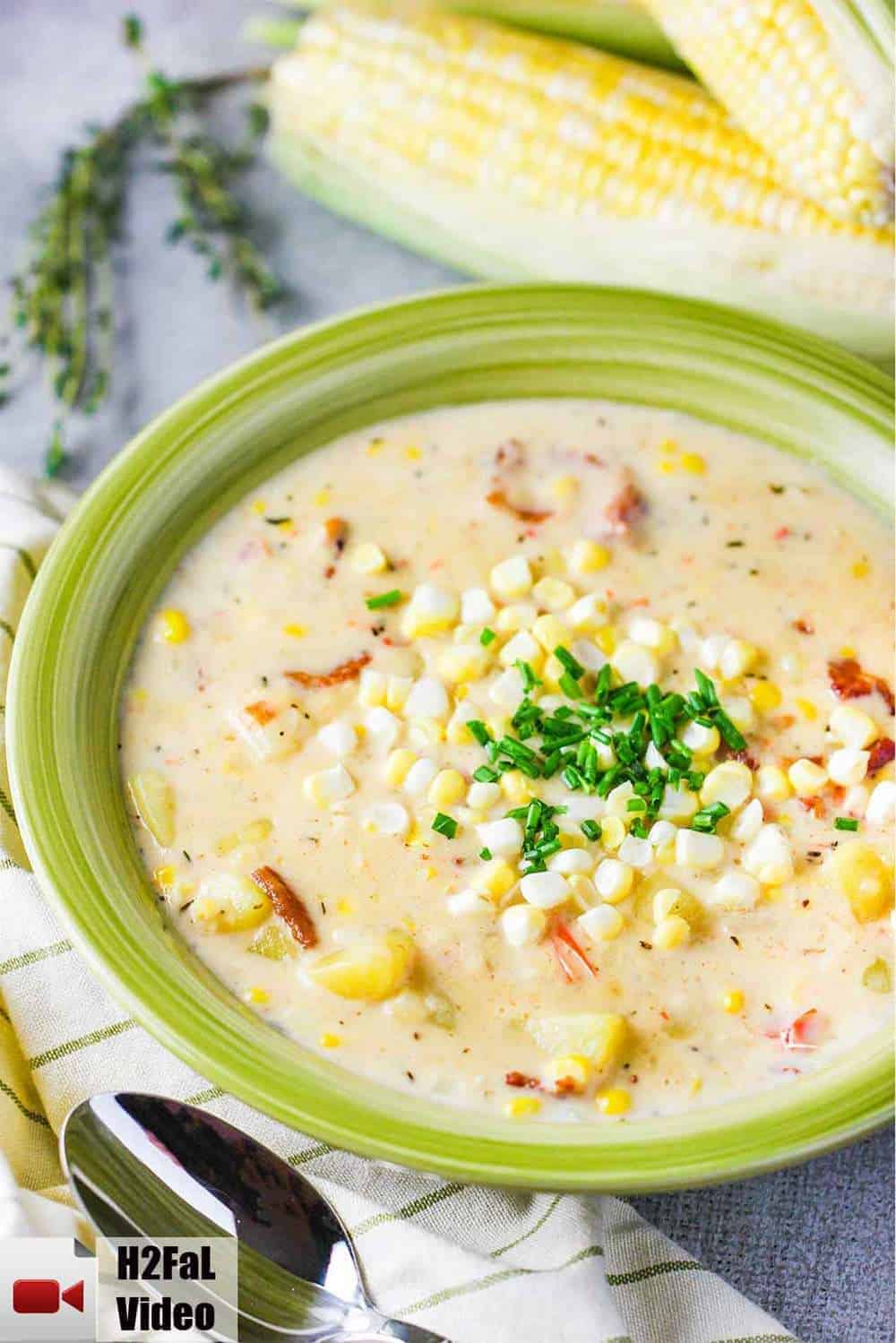 For many soups, we love using homemade stock, but that’s not always possible. A good quality store bought stock will work just fine in this recipe.

Be sure to get the freshest ingredients available for this amazing corn chowder.

Watch us show you how easy it is to make Farm Fresh Corn Chowder!

You may wonder what the difference is between “soup” and “chowder.” Well, they are quite similar, however chowder is usually thick and is often cream-based, but not always. All we know, this corn chowder is off-the-charts good.

We think the smoked bacon adds such a depth of flavor to this chowder, that we strongly encourage you to visit the butcher in your market and get 6 thick slices of his or her best smoked bacon. 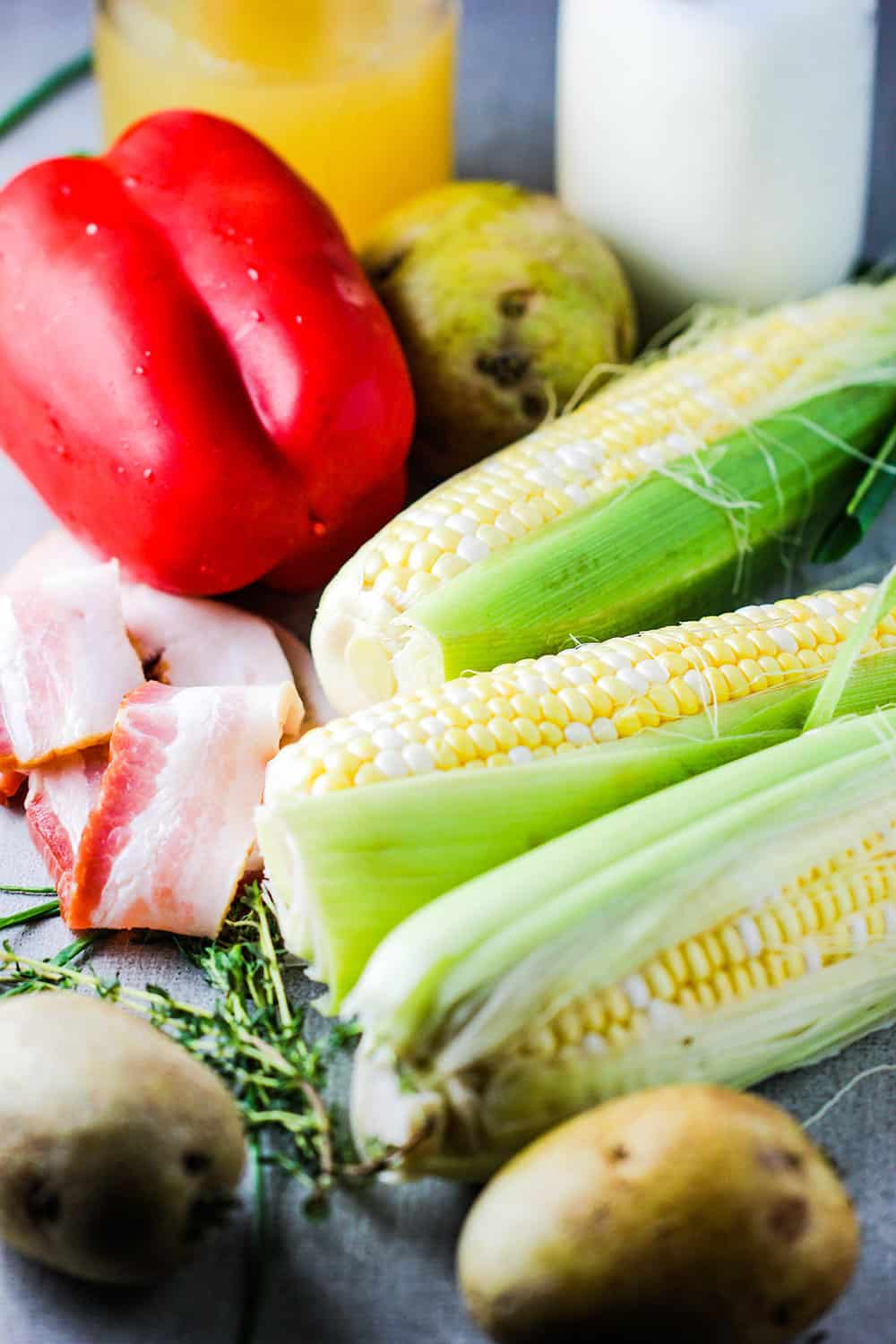 USE FRESH CORN WHENEVER POSSIBLE

Fresh corn right off the cob is absolutely the best for this corn chowder.

The corn is sweet and the milky liquid from the cob is so flavorful.

Carefully use a large, sharp knife to remove the kernels from the cob. Four ears of corn should get you about 2 cups of corn. It’s always safe to have an extra ear of corn on hand, just for a little extra, if needed. Plus, we love to sprinkle some freshly cut kernels as a garnish to the soup just before serving. It adds a wonderful texture and taste to the chowder. 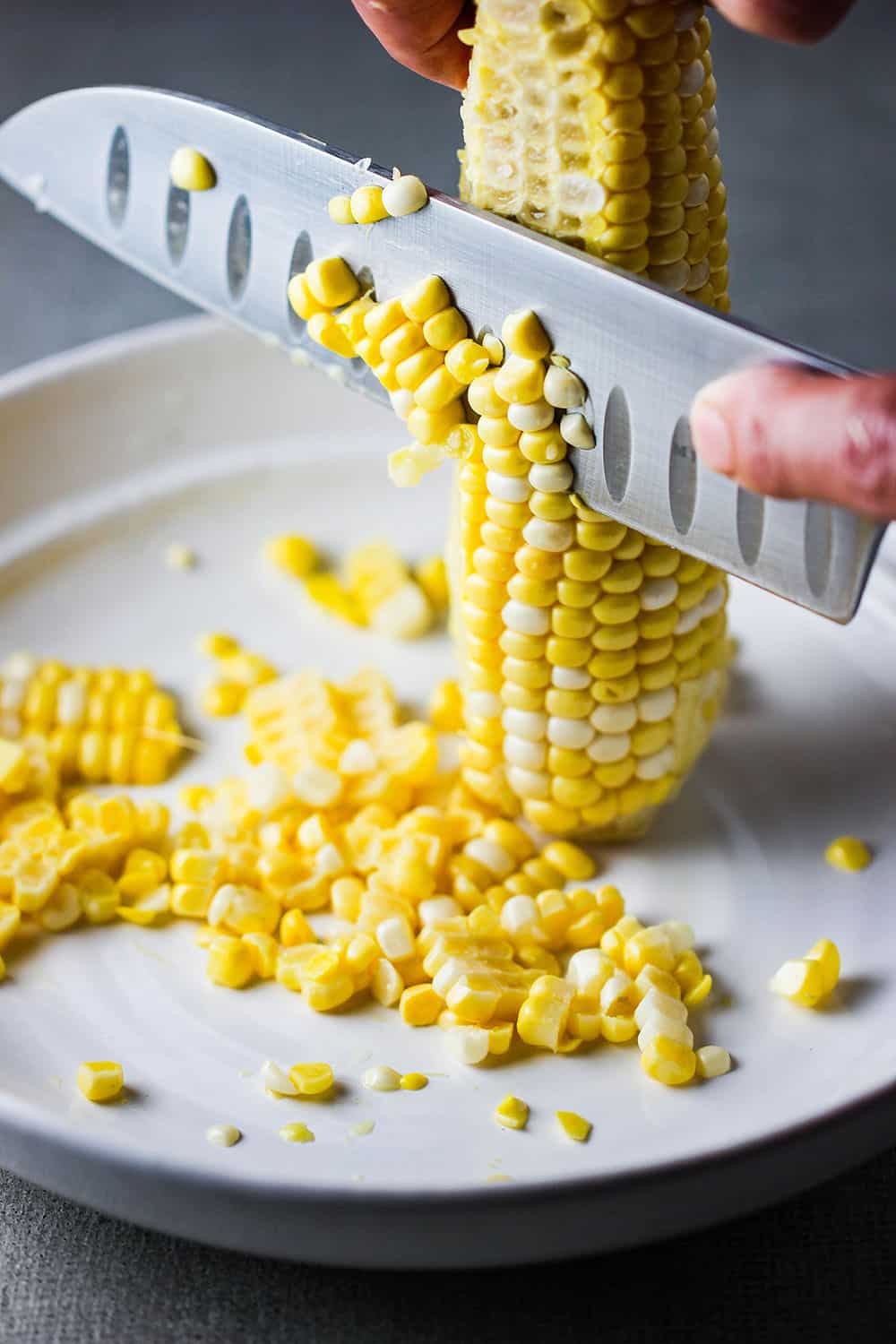 After cooking the cut bacon in a large pot (such as a Dutch oven), you’ll need to remove all but about 1 to 2 tablespoons of the bacon grease.

We always save our unused bacon grease for another use (such as Restaurant-Quality Hash Browns!).

Add a couple pats of butter to the hot pot, then toss in the onions, red bell peppers, thyme, and cumin, and cook until soft and translucent, about 8 minutes. This makes a beautiful foundation for this Farm Fresh Corn Chowder! 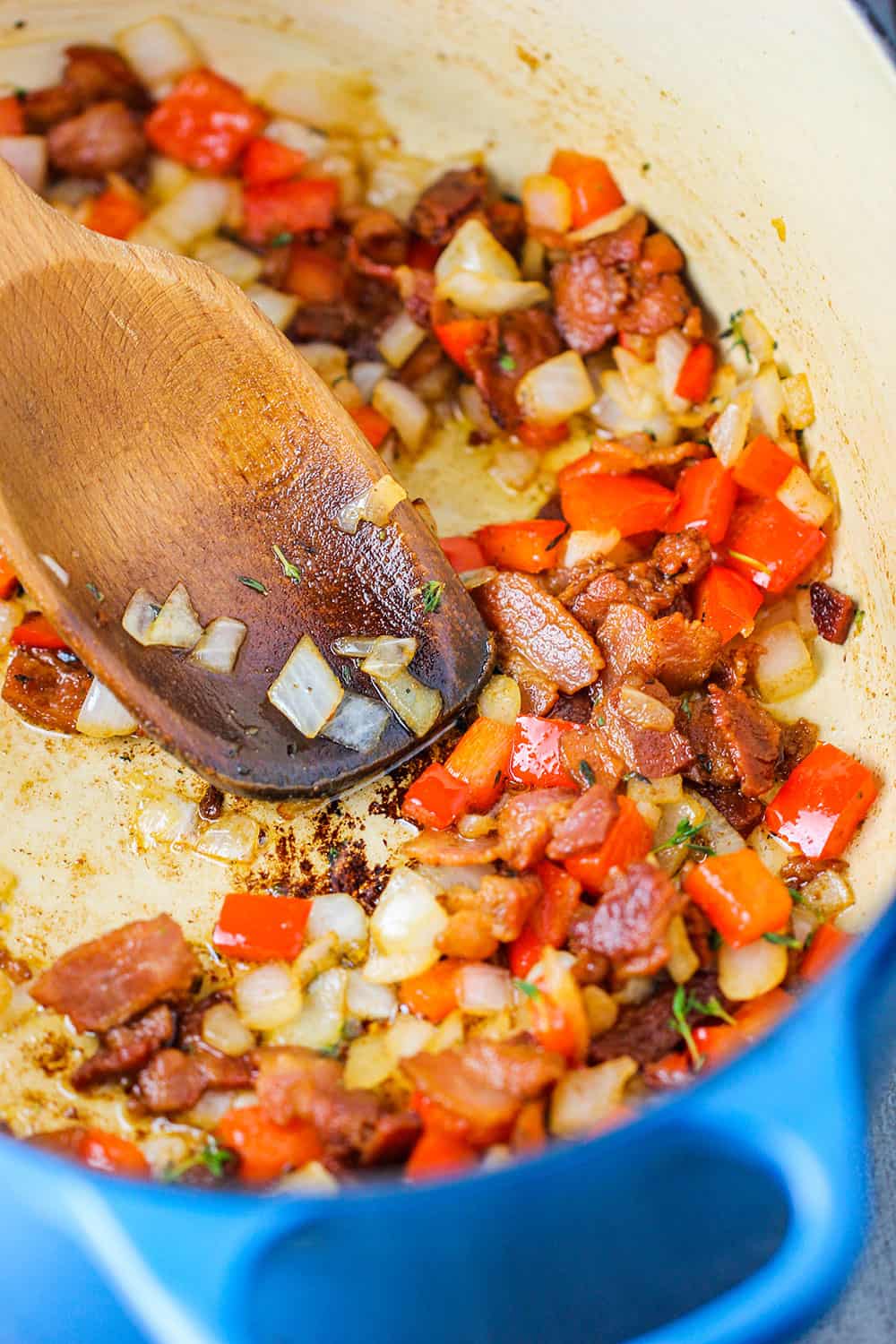 Bring it to a boil then cover for just 10 minutes.

After removing the lid, you’ll see the potatoes are nice and tender and the corn is perfectly cooked. Using a wooden spoon, we like to smash some of the cooked potatoes and corn against the side of the pot. This naturally helps to thicken the chowder and adds a nice texture. 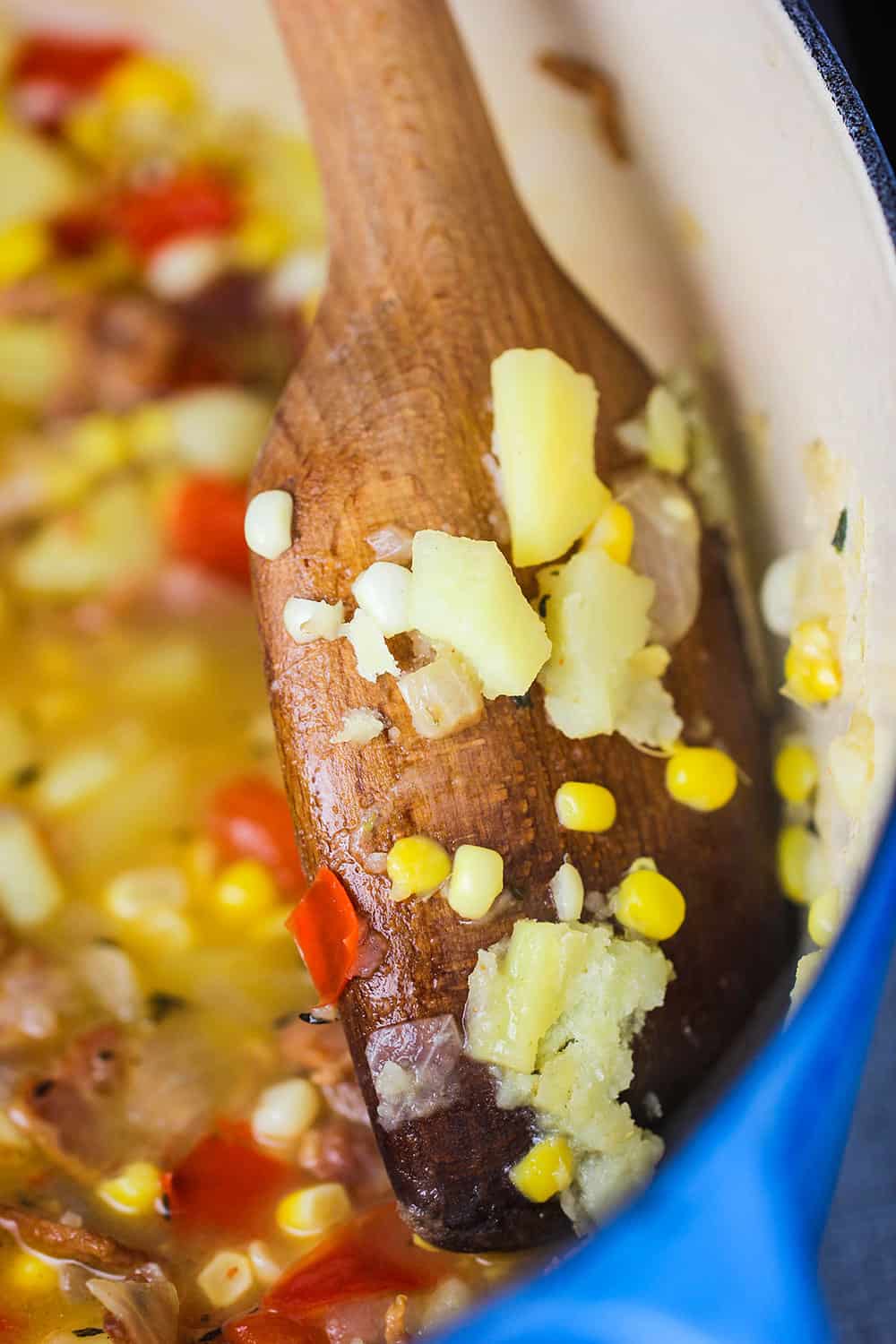 CREAM ADDS A VELVETY RICHNESS TO THE CORN CHOWDER

The last ingredient that we think puts this Farm Fresh Corn Chowder over the top is a bit of heavy cream.

It may seem a little indulgent, but the cream adds a lush texture to the chowder and melds beautifully with the other ingredients.

Stir in the cream until fully incorporated. 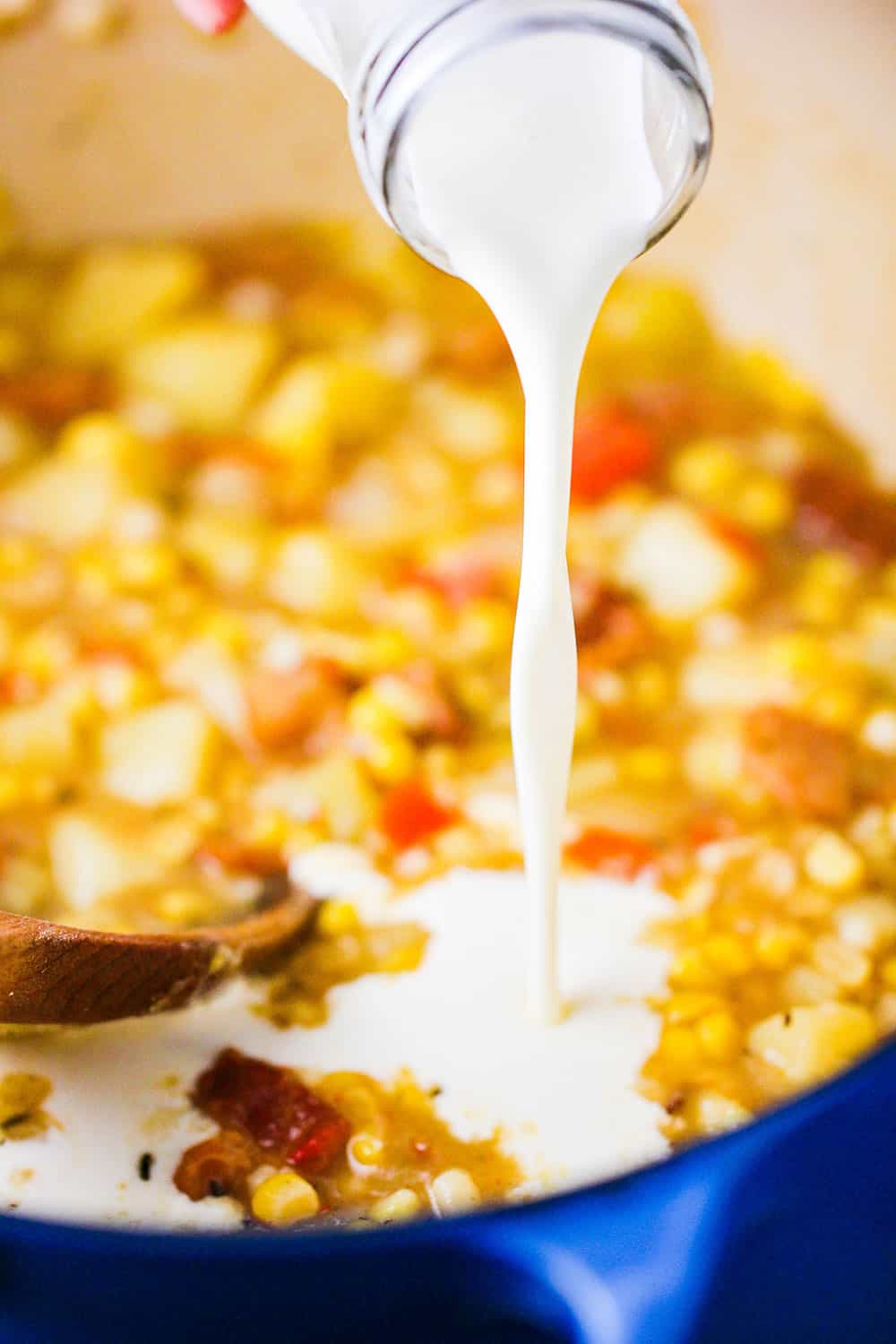 The corn is the star of this chowder, no doubt, but the potatoes and other ingredients compliment each other so beautifully.

Every spoonful provides layer after delicious layer of culinary delights. 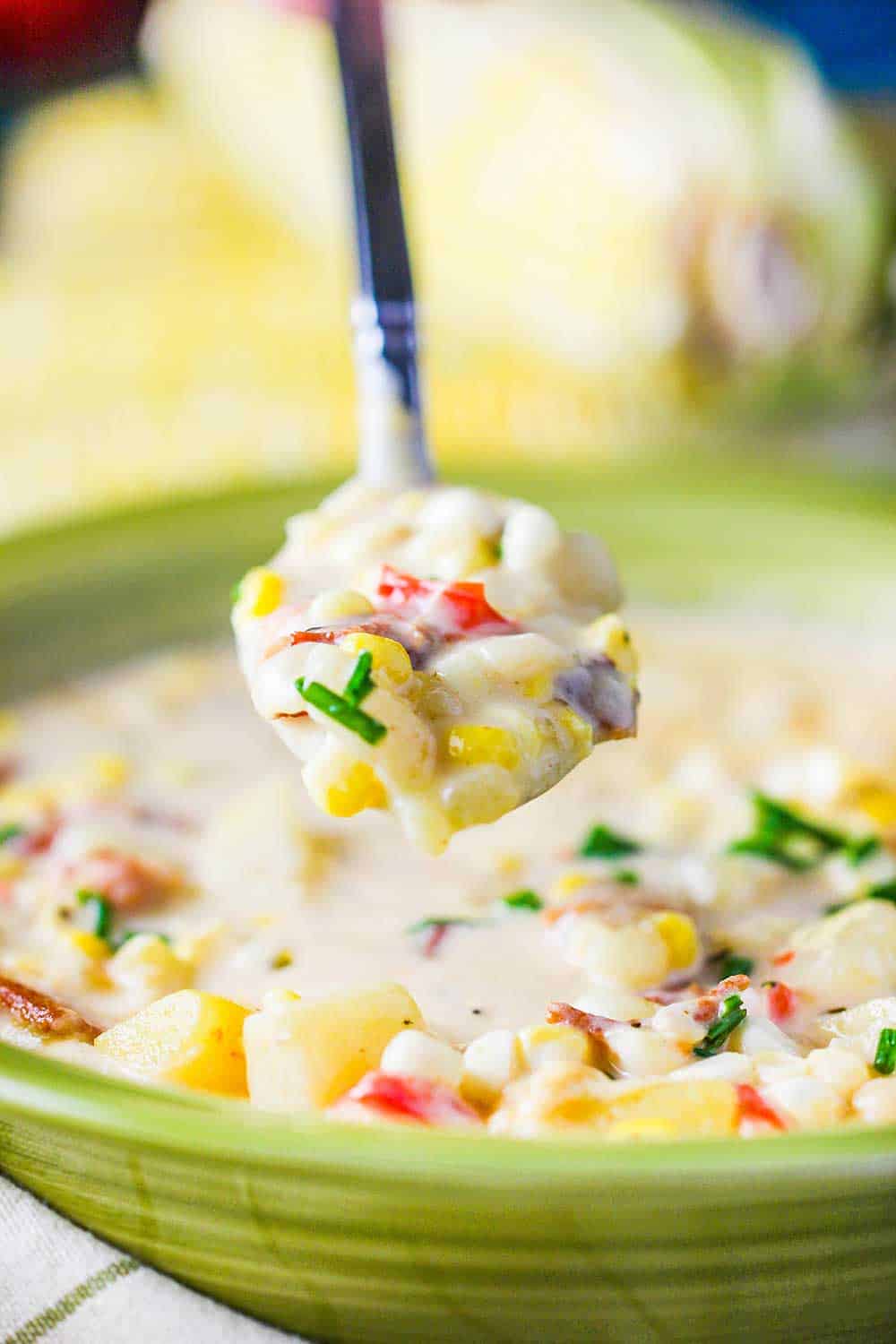 CORN CHOWDER IS COMFORT FOOD AT ITS BEST

As we may have mentioned, Farm Fresh Corn Chowder is absolutely one of our most favorite comfort soups to make. If you like this, however, you’ll probably also love our:

And another awesome thing about this Corn Chowder is that it comes together in only about 30 to 40 minutes.

So, hurry and go make this spectacular Farm Fresh Corn Chowder recipe!. You and your family will be so glad you did! 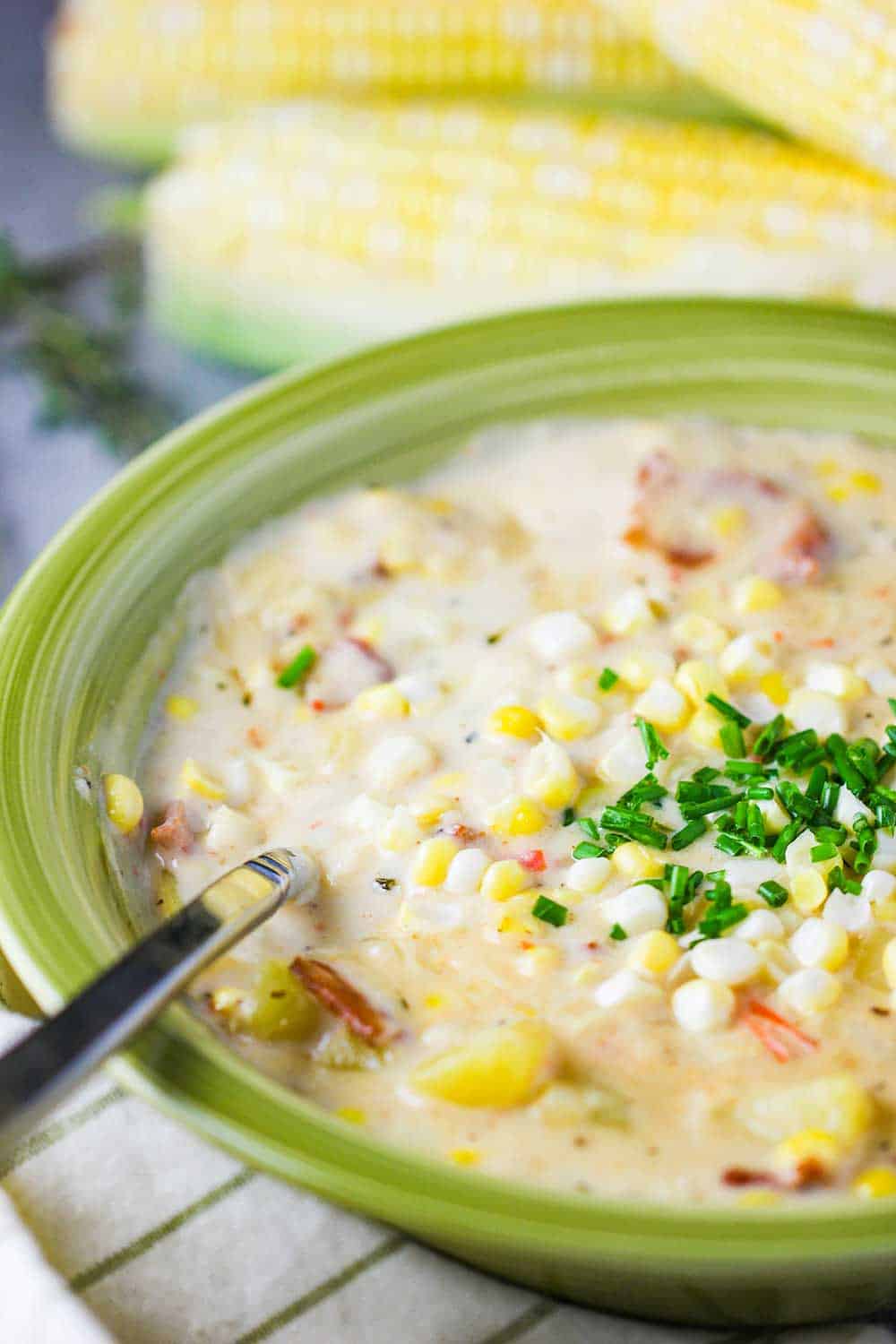 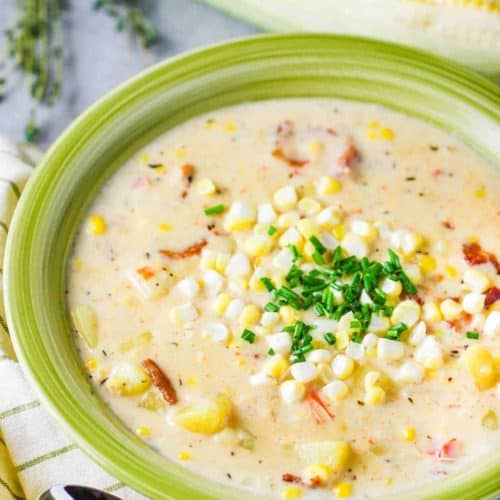 This Farm Fresh Corn Chowder will just make you smile. Make it in the summer when you can get corn fresh from the farm, or even in the colder months, when you can use frozen corn. Either way, It's just so good. Of course, the homemade chicken stock brings it to incredible heights. So amazingly good!
5 from 5 votes
Print Pin Rate
Course: Soup
Cuisine: American
Keyword: Chowder, Fresh Corn
Prep Time: 15 minutes
Cook Time: 40 minutes
Total Time: 55 minutes
Servings: 8 people
Calories: 268kcal
Author: Kris Longwell

Cornbread Dressing with Sausage and Cranberries