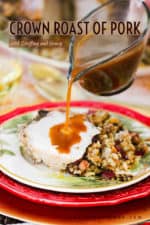 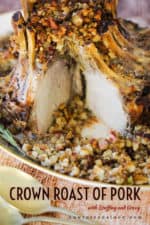 This Royal Crown Roast of Pork with Stuffing recipe is a stunning presentation and the taste is simply incredible.

When you are ready for an impressive headliner for your holiday feast, this recipe is the answer! The stuffing can be made a day in advance, making the day of service super easy! 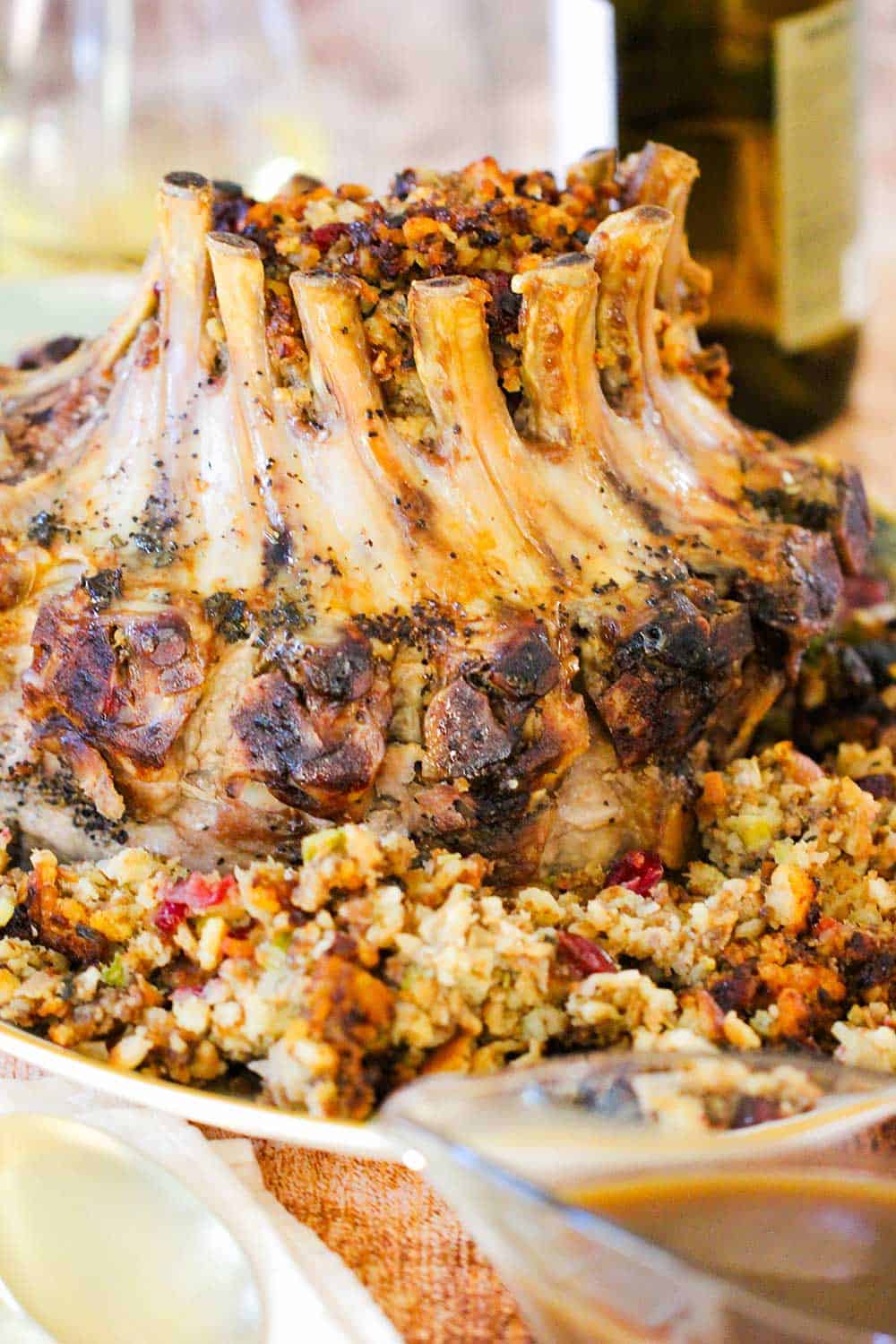 HOW TO A MAKE ROYAL CROWN ROAST OF PORK

As mentioned, if you make the stuffing in advance, really all that’s left is seasoning the pork and roasting it.

And then, of course, making the most amazing sauce. But we’ll get to that.

Watch us show you how to make this incredible crown roast in your own kitchen!

WHAT CUT IS PORK CROWN ROAST

We recommend placing an order with your butcher for a 9 lb. crown roast. Most butchers know exactly what to do, even at your local supermarket.

The roast is usually made with two racks of pork loin rib roast that have been frenched (bones exposed at one end) and tied together to form a circular crown-like roast.

EXPERT TIP: Don’t worry if there is not a complete cavity on the inside of the roast. The stuffing should not go all the way down the roast, it simply just is mounded on the top, only about 2 cups.

HOW TO MAKE THE STUFFING

We simply love the stuffing for pork crown roast.

All you need to do is grab a loaf of good artisanal bread, cut it into cubes, and pulse it a few times in your food processor.

Melt the butter with some salt in a large skillet and then cook the bread crumbs until golden and crisp.

EXPERT TIP: Don’t over-pulverize the bread in your food processor. You’ll want the bread crumbs to still have texture, which will result in the perfect stuffing. 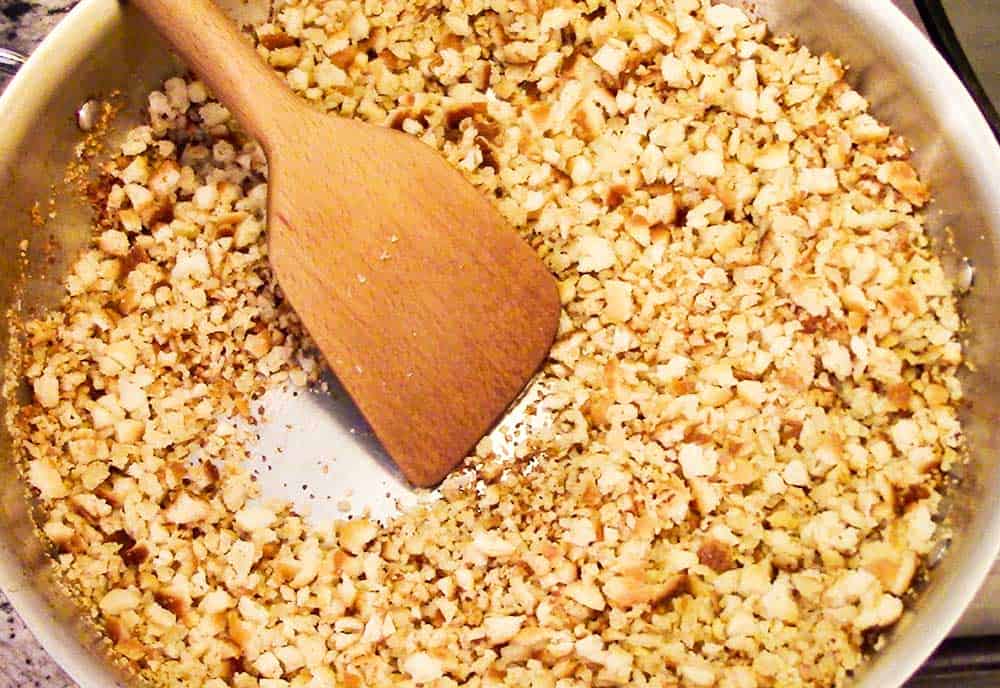 HOW TO COOK THE CROWN ROAST OF PORK WITH STUFFING

First season the roast all over with salt, pepper, and herbs. We love a combination of fresh sage and thyme.

Place the roast in a roasting pan and then add approximately two cups of the prepared stuffing on the top of the roast. No need to push the stuffing all the way down the center of the roast.

Add about ¾ cup of chicken stock and apple cider, each. Or, you can use all chicken stock, or even just water. Remove the foil from the top of the roast in the final 30 minutes of cooking.

EXPERT TIP: The stock and apple cider will deepen the taste of the sauce, but it is very important to keep an eye on the liquid levels as you are roasting. If too much evaporates, then the apple cider could start to burn. We find adding another ¼ cup of stock, about every half hour keeps the right amount of liquid in the pan. There, of course, will be juice from the roast, too, which is wonderful. 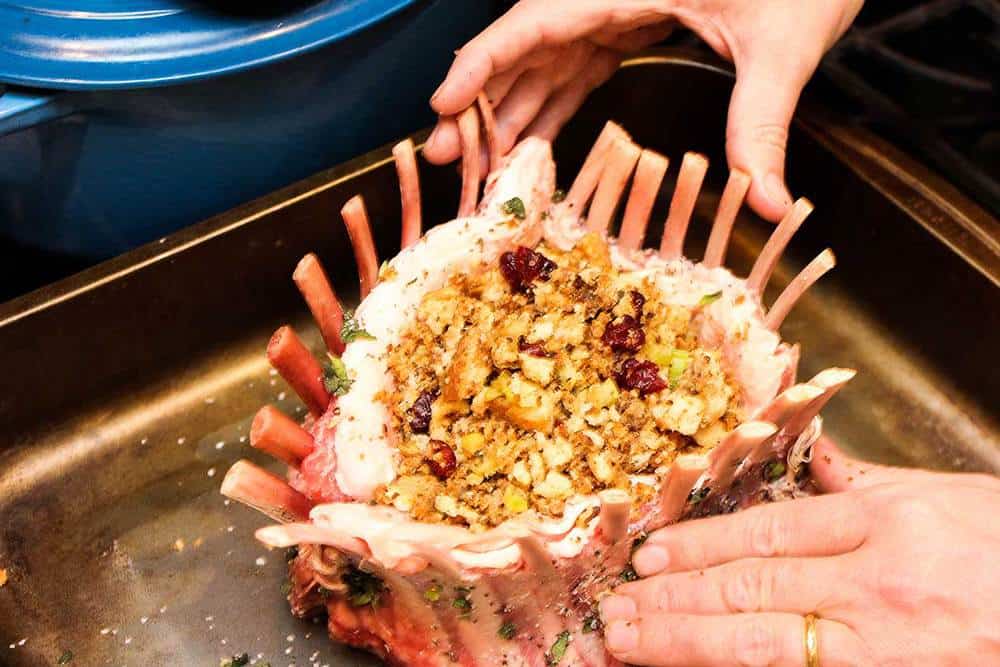 WHAT SIDES TO SERVE

When thinking of crown roast of pork side dishes, you’ve already got the main one done, the stuffing! After topping the roast, you’ll have enough left over to fill about a 2-quart baking dish.

Simmered green beans are also a nice touch, and we love serving them with homemade dinner rolls!

NOTE: Once you’ve placed the extra stuffing in the baking dish, cover with foil and then place in the oven during the last 30 minutes of cooking. When the roast comes out, remove the foil and turn the oven up to 400°F and continue baking until fully cooked and slightly browned on top, about another 15 to 20 minutes. 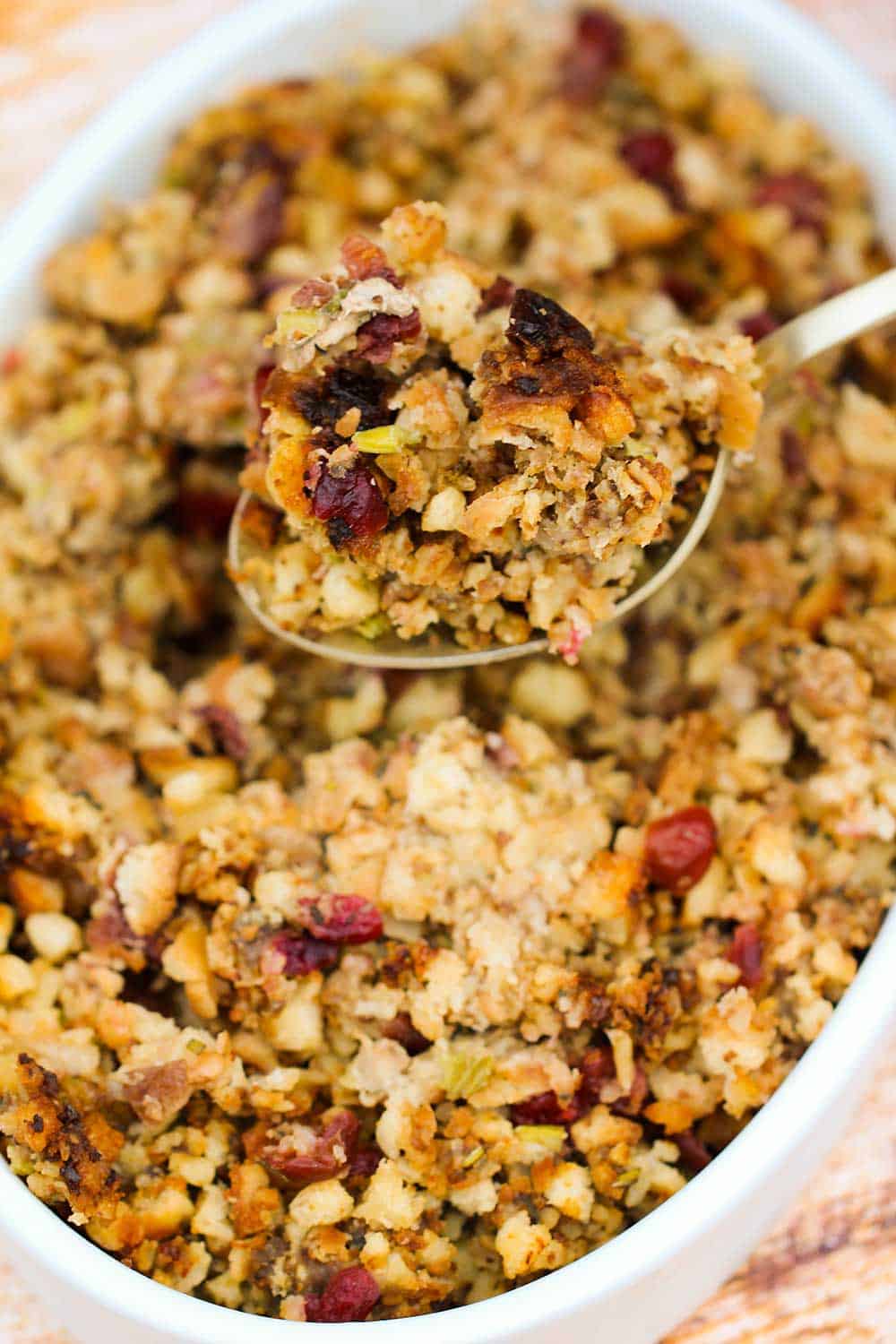 SLICING A CROWN ROAST OF PORK

After the internal temperature has reached 155°F, you’ll want the roast to rest for about 10 minutes in the pan. Next, use a large, flat spatula (or two) and transfer the roast to a cutting board and let rest for another 20 minutes.

To slice the roast, use a large sharp knife, or an electric knife, and simply cut downwards between the bones. Remove the chop and lightly season with coarse sea salt.

We find that slicing the roast at the table makes for a dramatic presentation, but if you prefer, you can cut all the chops, lightly season with sea salt, and serve on a platter. But folks, just look at this dish! 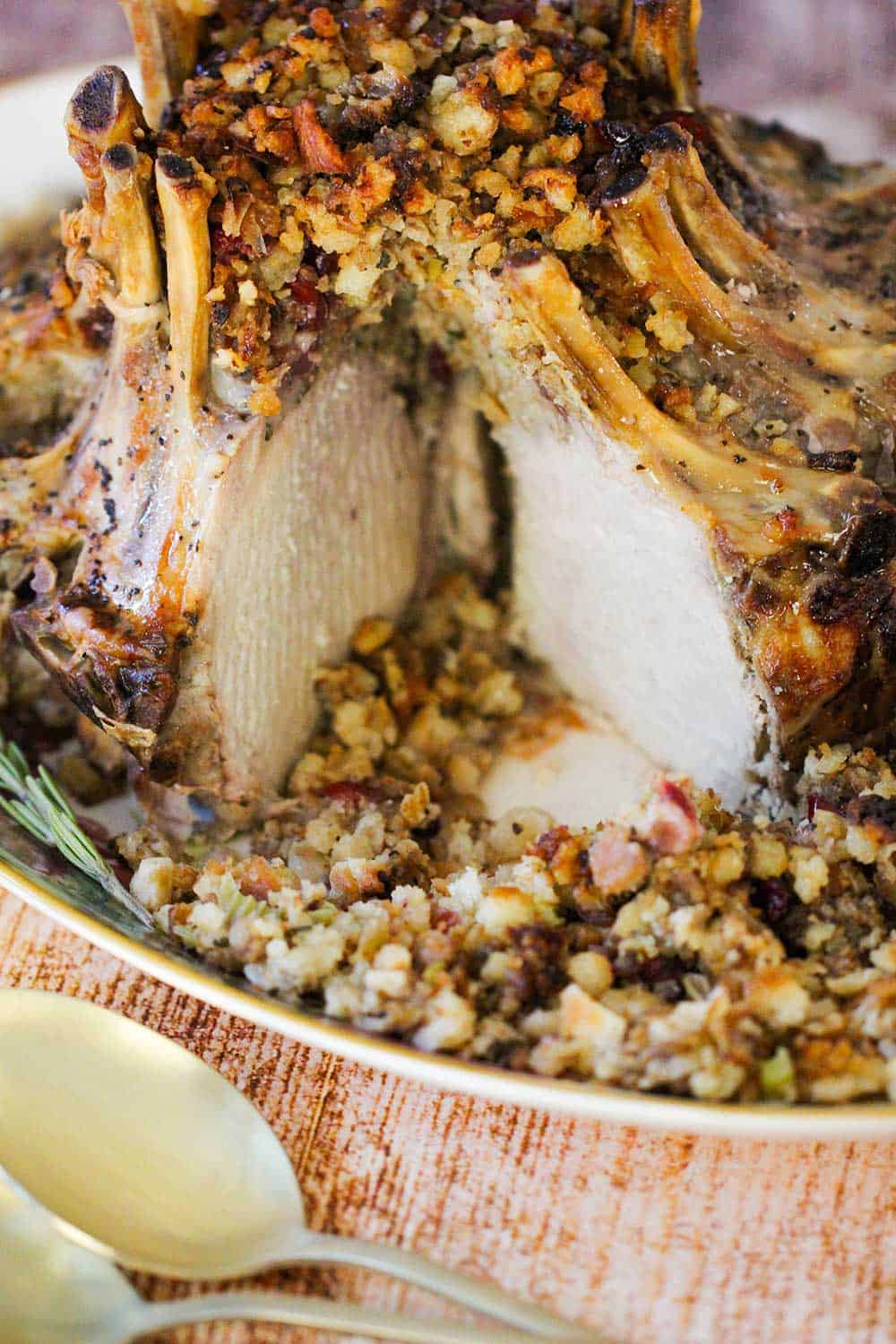 HOW TO MAKE THE CROWN ROAST OF PORK SAUCE

Trust us when we tell you how amazing the sauce (or gravy) is for this dish.

Once the roast has been removed from the pan, pour the juices from the pan into a fat separator, or a jar and use a spoon to skim the fat from the top of the liquid.

Next, place the roasting pan across two burners and then add more chicken stock and white wine, using a wooden spoon to scrape up the bits stuck to the pan. Cook until reduced, about 3 minutes.

Add in the pan juices and the corn starch slurry (3 tsp corn starch mixed with 3 tbsp of water) and stir until slightly thickened. Stir in a little butter and season with salt and pepper. If desired, strain through a sieve into your gravy boat. 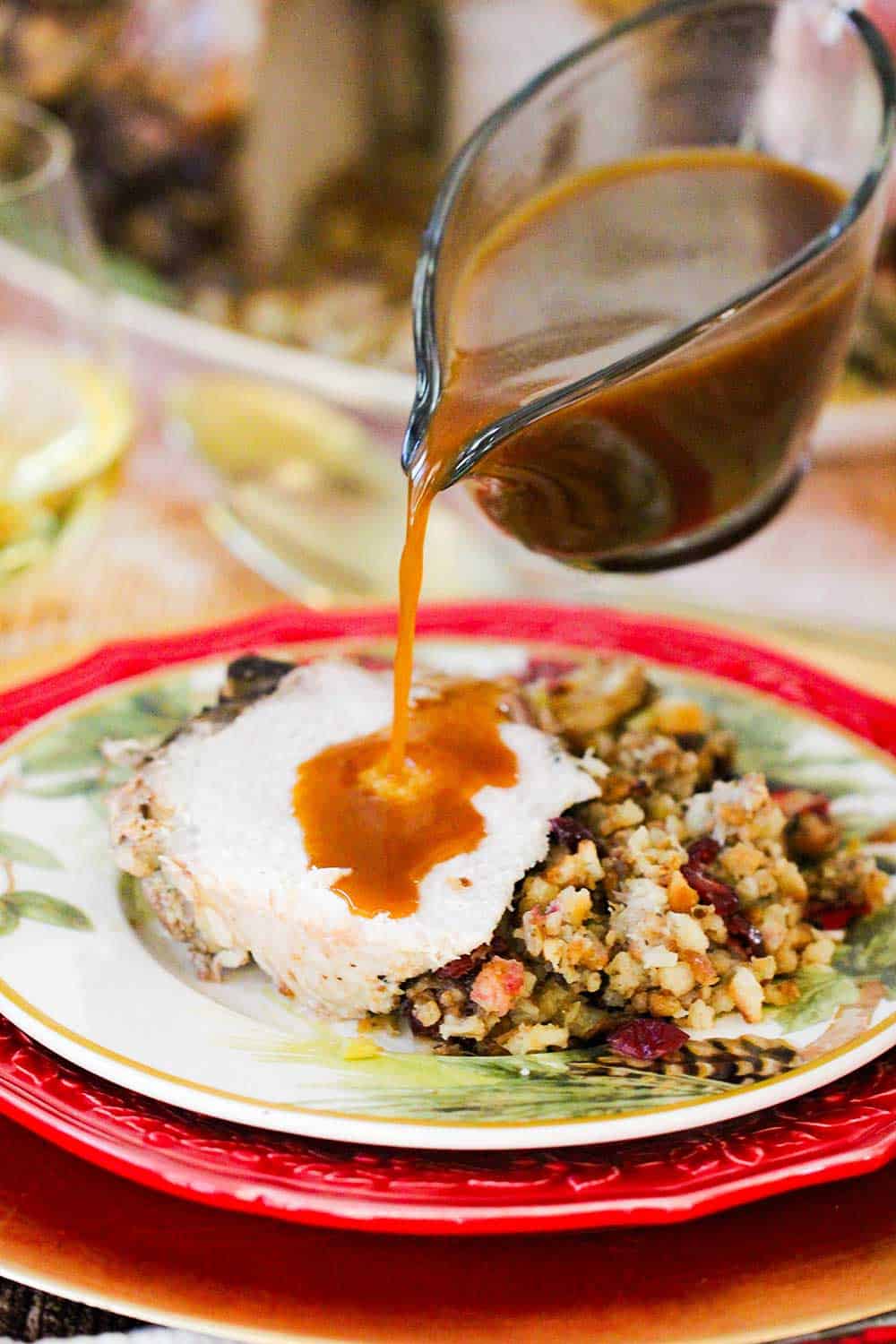 This is truly a show-stopper of a dish that your loved ones will be talking about for years to come.

And it’s so much easier to prepare than anyone will ever have to know!

Simply amazing and so delicious! 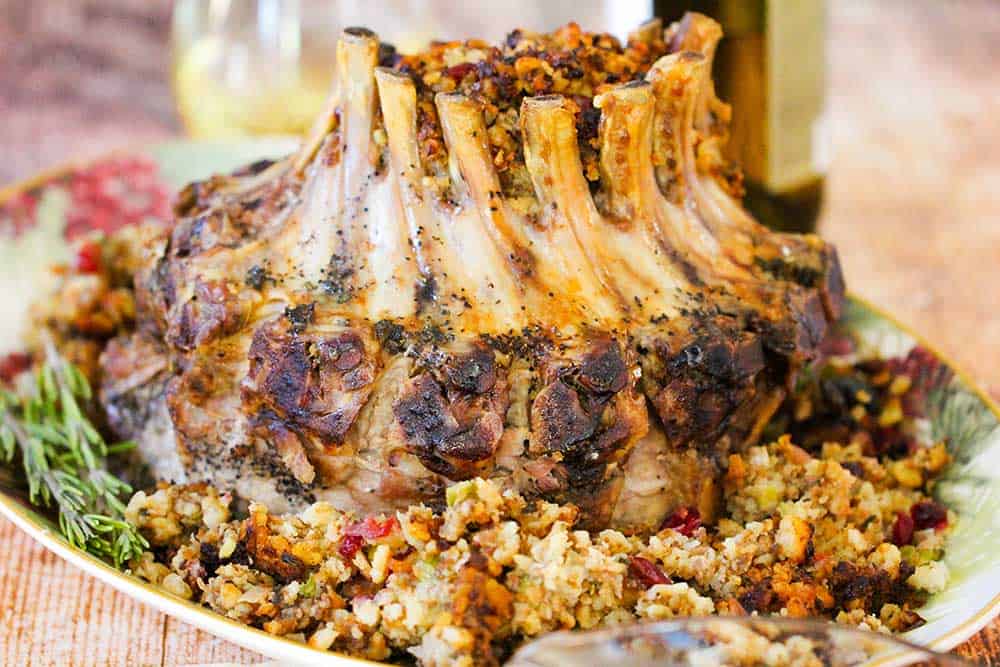 Ready to impress? Go for it!

And when you make this incredible roast, be sure to take a picture, post on Instagram, and tag @howtofeedaloon and #howtofeedaloon! 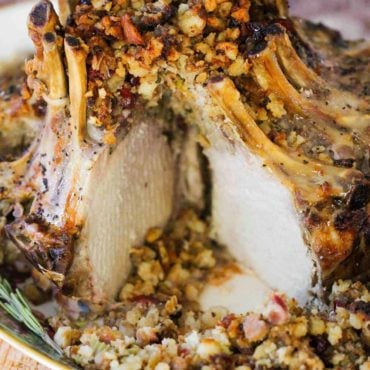 COOK THE ROAST AND STUFFING

Crown roast of pork can be ordered from your butcher.  Make sure the tips of the chops are frenched, with the meat cut away, exposing the bone.   The dressing can be made up to one day in advance.   Don't cook the ground pork prior to baking. Tightly cover the bones and the stuffing on the roast until the last 30 minutes of cooking.   Once you remove the foil, keep an eye on the roast, if the stuffing and bones are starting to get too dark, add the foil back over it.  Use an instant-read thermometer in several places throughout the roast.  The stuffing can act as an insulator, and cause some parts of the roast not cook as evenly as other sections.  The internal temperature should not be below 150°F to 155°F. Place the additional stuffing in the oven 30 minutes prior to removing the roast (usually after about 2 hours of roasting the pork).  Once the roast comes out, remove the foil from the dish of stuffing, and increase oven temperature to 400°F.  Bake for another 15 to 20 minutes, until toasty on top. Keep leftovers in the refrigerator for up to 1 week and freeze for up to 2 months.

POST UPDATE: This recipe was originally published in December 2016, but recipe was tweaked and post updated with new photos and fabulous video!