This is a sponsored post, but the words, images and opinions are 100% ours.
Cinnamon Cocoa Brownie Fritters:  Is it possible that we have stumbled across the four most tantalizing words in the English language?  Well, when you put those four magical words together, and then actually make what they describe..using a brownie from the greatest brownie maker in the world, Fairytale Brownies, you will feel as though you have achieved sweet-treat culinary greatness…right in your own kitchen.

Oh, and a drizzle of homemade butterscotch sauce only solidifies the pure amazingness of this delectable treat. 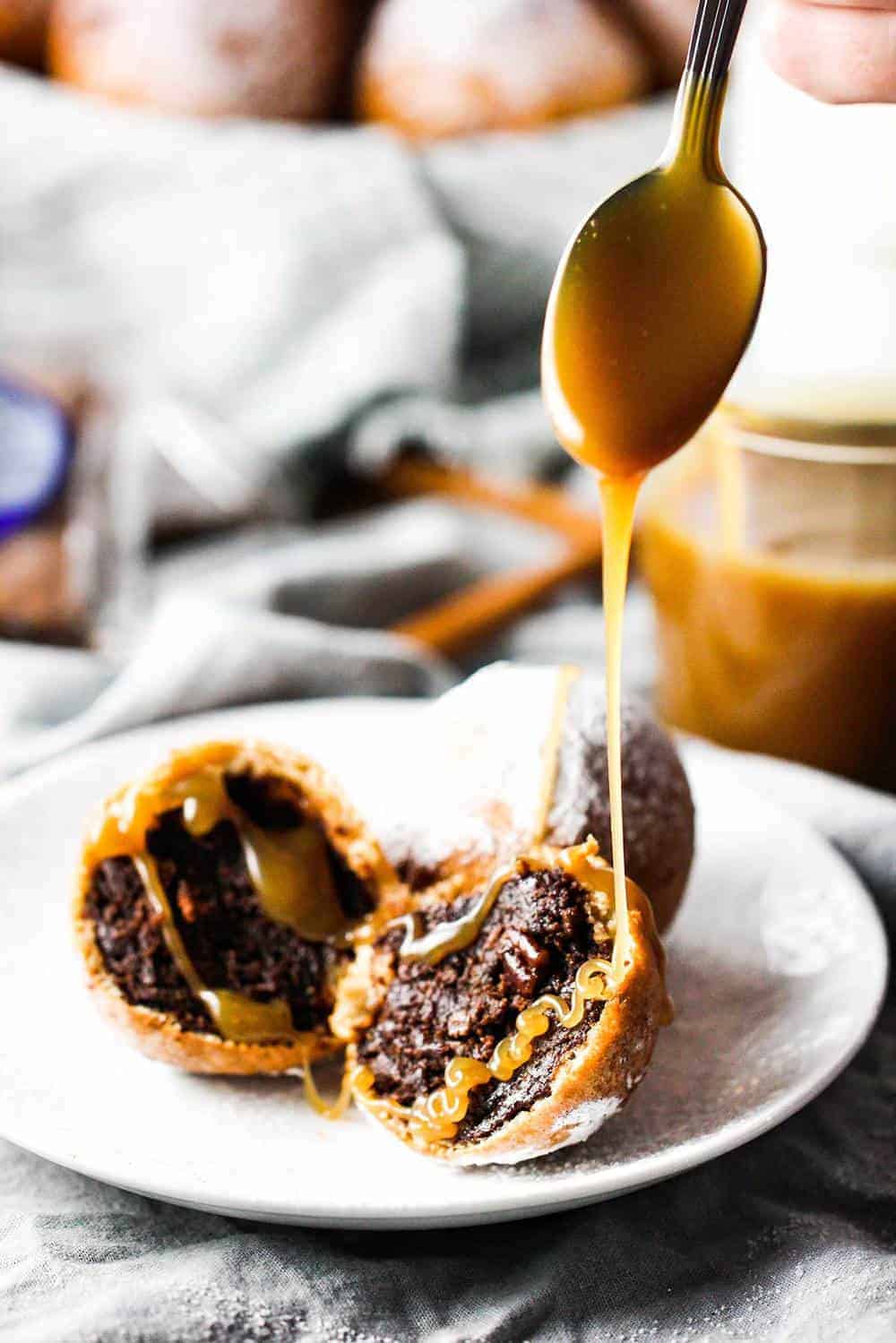 FAIRYTALE BROWNIES ARE LEGENDARY IN TASTE AND TEXTURE

When we recently discovered Fairytale Brownies, right after we took our fist bite…we immediately said (to the half-eaten brownie): “Where have you been all of our lives?!” Folks, there is not a brownie on the planet like a Fairytale Brownie.

David and Eileen are co-founders of the company and they have been producing these luxuriously decadent brownies for 25 years. Their talented team bakes, packages and delivers (to your doorstep) a variety of brownie flavors ranging from original, to cream cheese, caramel, raspberry, toffee crunch, mint chocolate, and so much more. They even have a couple of sugar-free brownies that you would never know were sugar-free.

When given the opportunity to partner with them and develop a recipe using their brand new brownie, Cinnamon Cocoa, we could hardly contain our excitement.

It didn’t take much testing to land upon what we believe is the best dessert to ever come out of the H2FaL Test Kitchen: Deep-Fried Cinnamon Cocoa Brownie Fritters with Homemade Butterscotch Sauce. Just let that sink in for a moment. 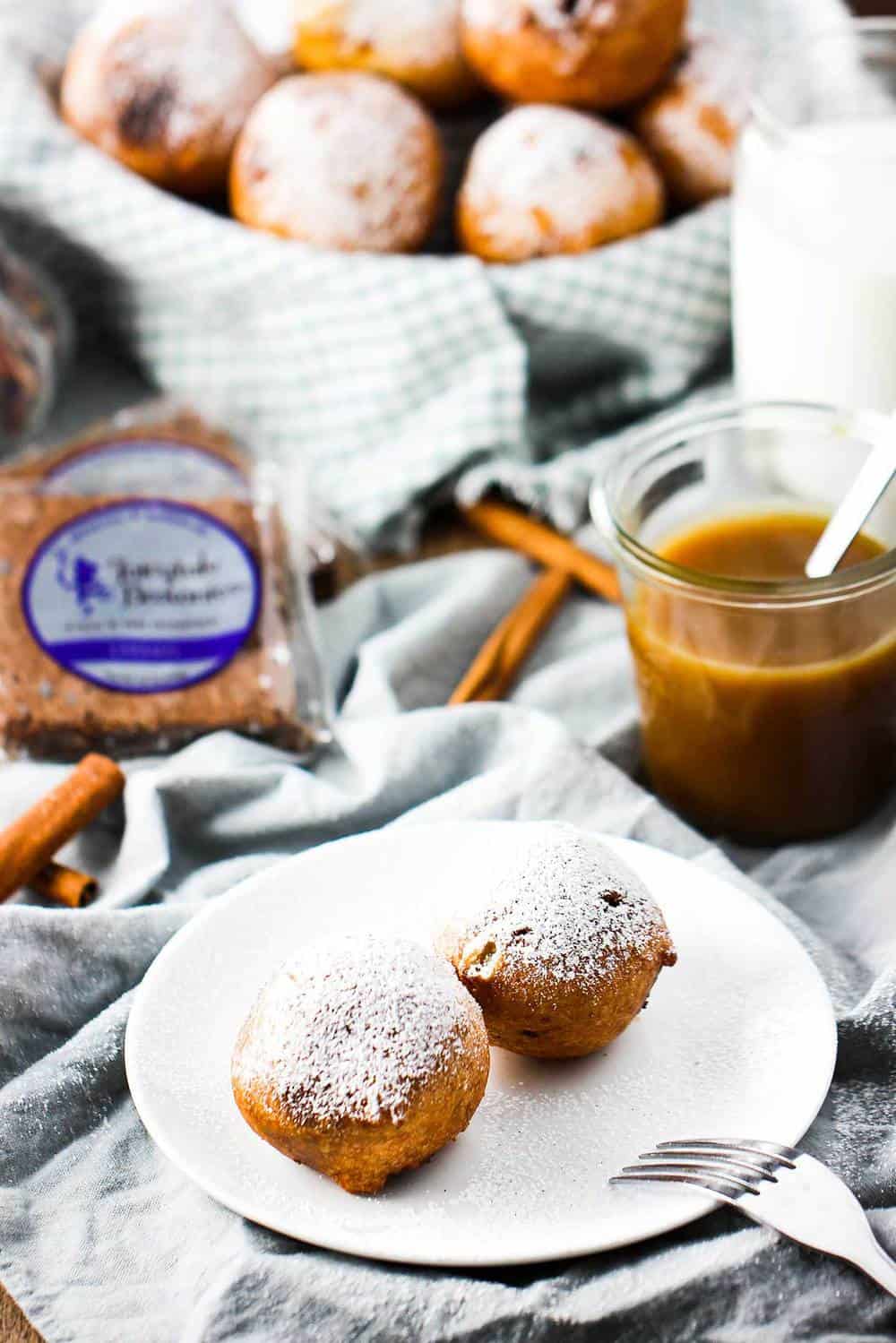 TAKING THE BEST BROWNIE IN THE WORLD TO NEW HEIGHTS

These epic brownies are made only with the best ingredients in the world including imported Belgium chocolate, farm-fresh eggs, real creamy butter, and top-notch fluffy cake flour. Meticulously prepared by expert bakers and then individually wrapped and sealed for absolute freshness, delivered to your door.

We knew elevating these perfect brownies in a unique and delicious recipe would be a tall order. But we were up to the tantalizing task.

We started with Fairytales Brownies’ newest creation, Cinnamon Cocoa Brownies, and then gave them a simple rough chop. We love these brownies so much: They are so moist and include top-of-the-line cinnamon, rich chocolate and a pecan crumble that work beautifully together in a heavenly manner. Divine. 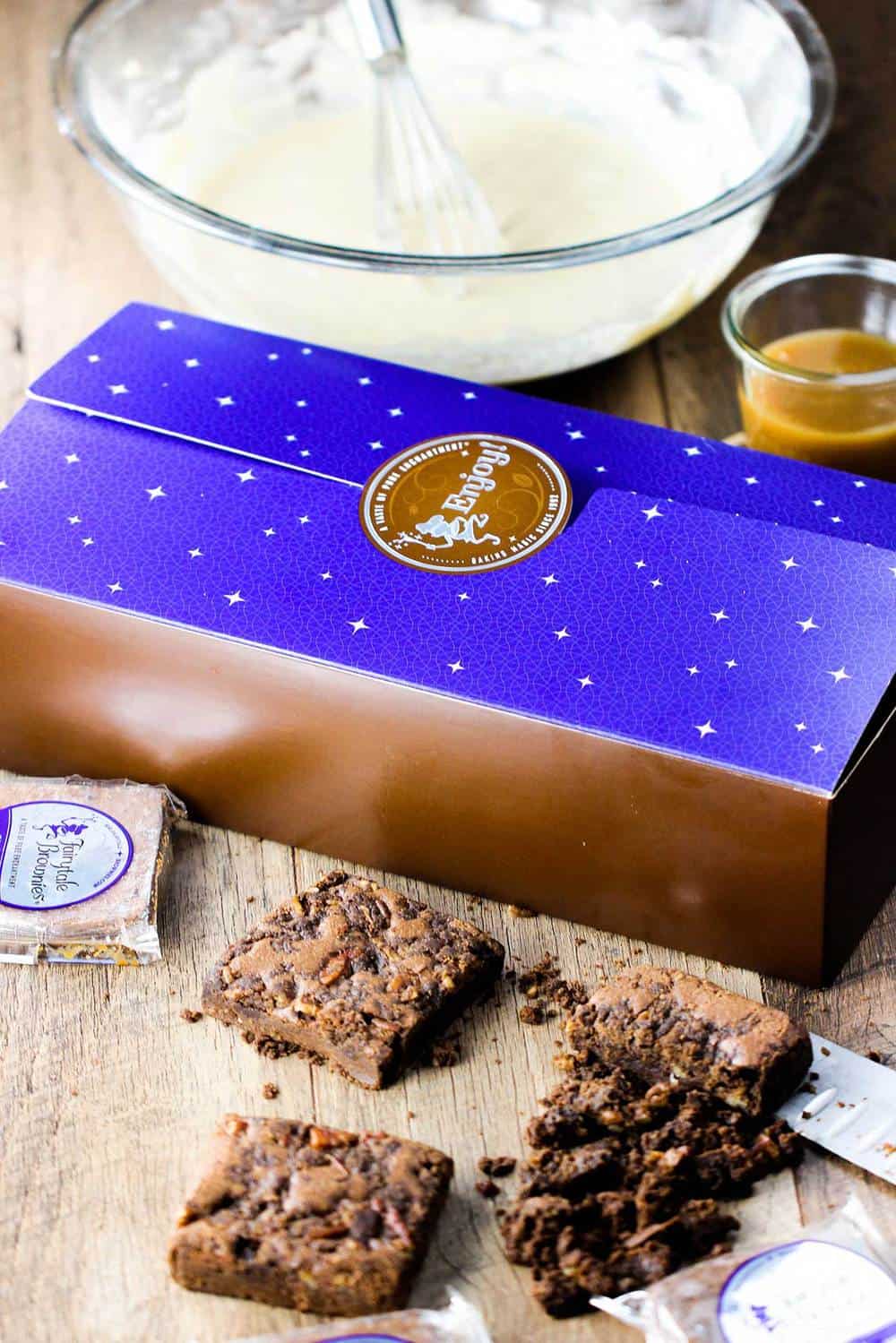 FORM A CHOCOLATE FRITTER BALL IN THE PALM OF YOUR HAND

We tested different shapes and sizes for the fritters, and found that forming the roughly chopped brownies in a ball about the size of a golf ball worked the best.

The brownies are so moist that they stay in tact with no problem. 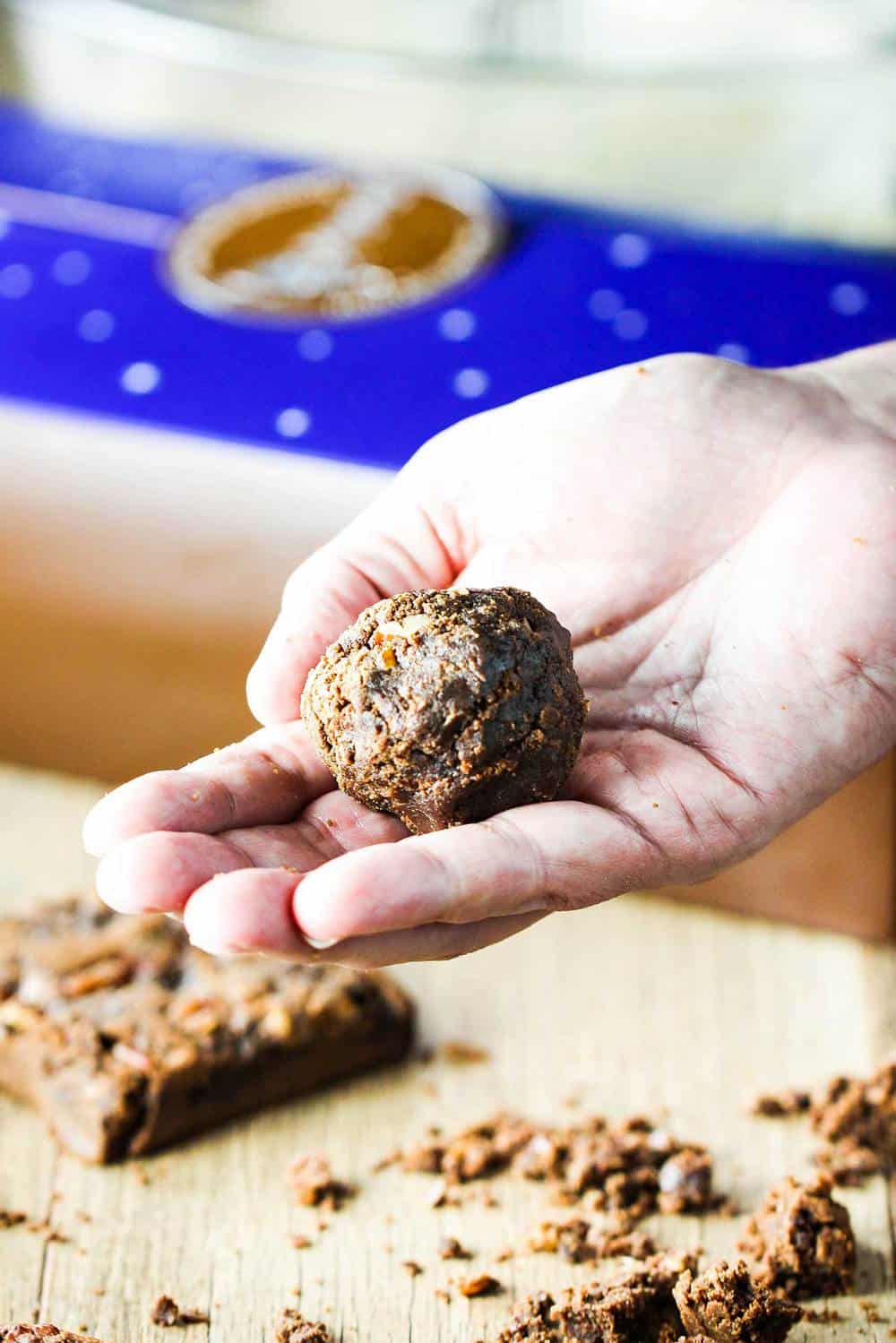 Next, we made a simple sweet (but not too sweet) batter that was nice and thick and would form the perfectly delicious casing for the Cinnamon Cocoa Chocolate Fritters.

We found that simply dipping the brownie balls into the batter with your fingers was easiest. You could also use a couple of forks, or even toothpicks inserted into the brownie for navigating the fritter around the batter, but again…a clean set of fingers worked best for us.

Meanwhile, heat your oil to around 350°F. 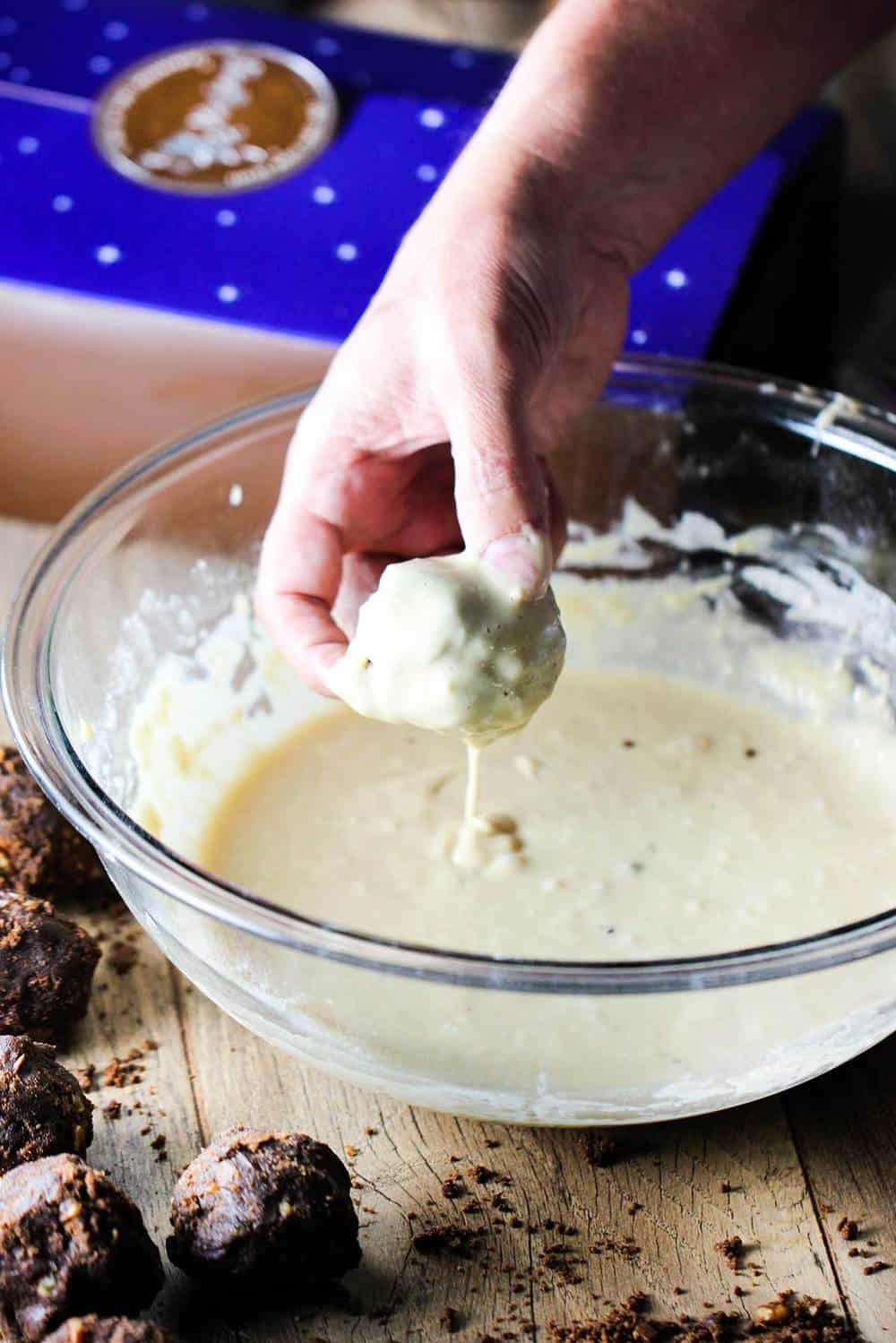 Very carefully drop the coated brownie balls into the hot oil, and let them cook for about 2 minutes, until nicely browned all over.

Use metal tongs, or forks, to rotate the brownie fritters in the oil.

It’s not uncommon for some of the batter to make little fried ‘tentacles’ dangling from the fritters. That’s no problem! We simply clip them off with scissors after they come out of the oil. Also, if the batter doesn’t 100% cover the fritter while frying, that’s no problem either. Once covered in powdered sugar and drizzled with butterscotch sauce, no one will even notice. 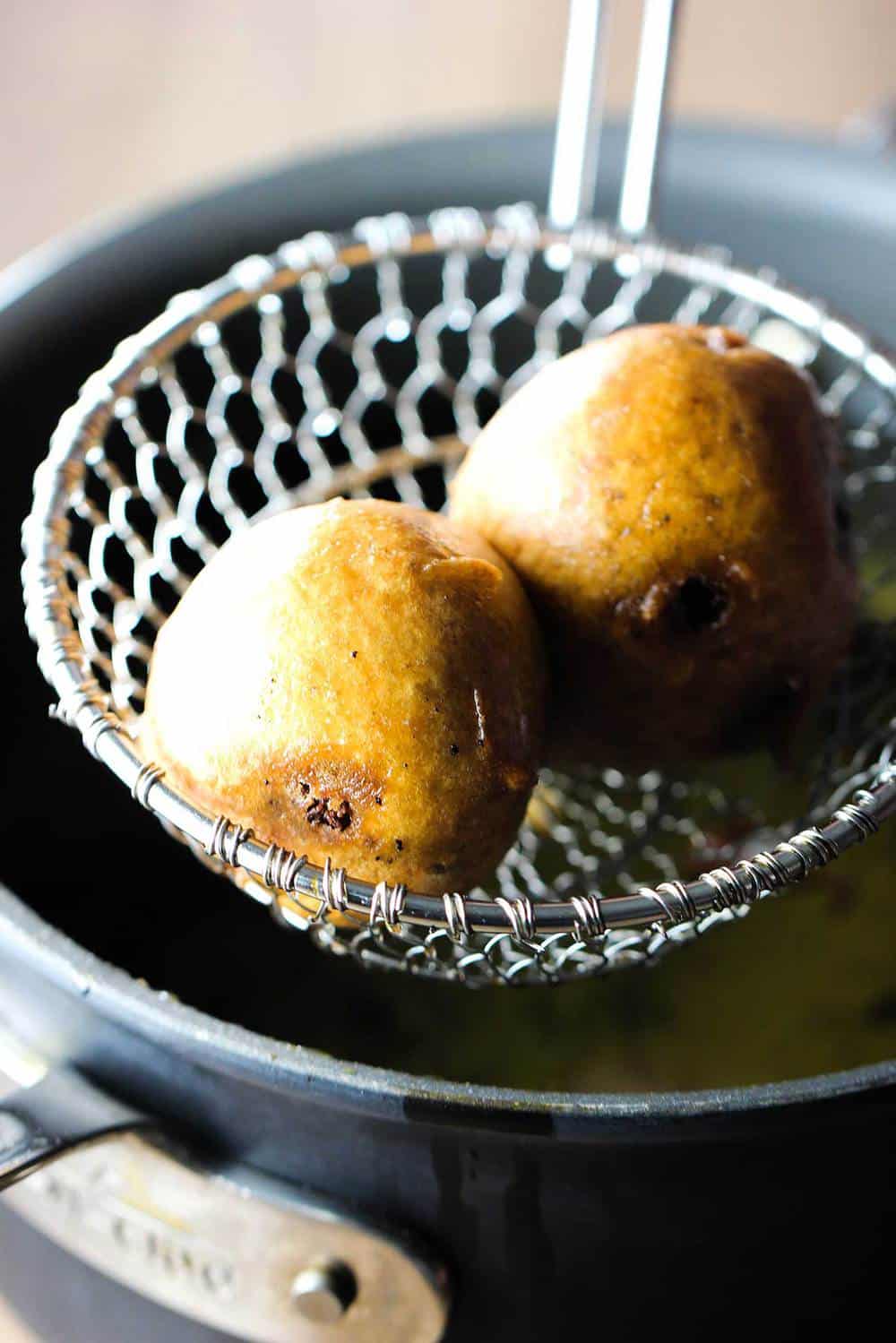 Now, you are almost ready to serve the best and most delicious sweet treat you’ll ever serve!

Take a good scoop of confectioner’s sugar (powdered sugar) mixed with some ground cinnamon and sprinkle over the chocolate fritters for a wonderful sweet flavor boost.

These brownie fritters are so delicious and beautiful, too! 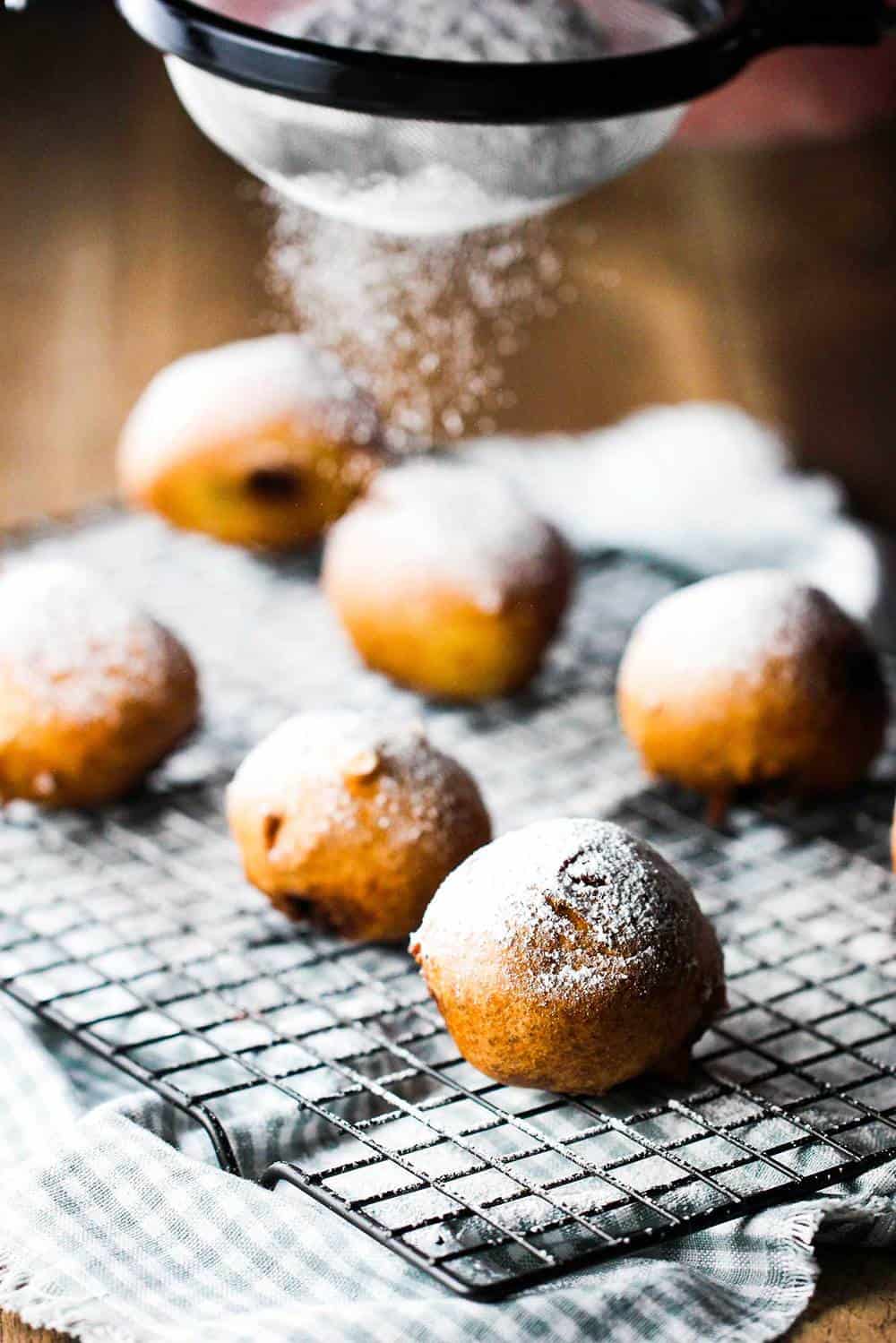 FAIRYTALE BROWNIES ARE SIMPLY THE BEST

We just can’t say enough about the quality of the brownies from Fairytale Brownies. The taste and texture is truly unmatched, and we can say without hesitation they are the best brownies we have ever eaten in our lives.

They also make incredible gifts. We love that you can even supply them a logo that they will print beautifully onto the packaging that you are having delivered. Perfect gifts for friends and family or for business-related gifts.

Try these brownies…we promise…you’ll taste the difference and they will become the only brownie you will ever want to consume.

And while you’re at it…make these amazing Deep-Fried Cinnamon Cocoa Brownie Fritters. They are to die for.

OTHER AMAZING DESSERT RECIPES TO TRY

But in the meantime, go and make these amazing Brownie Fritters! 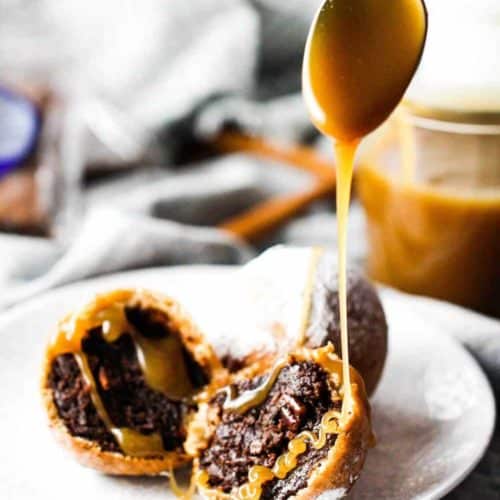 This is a sponsored post by Fairytale Brownies, but the words, opinions and photo are 100% ours.