THIS POST HAS BEEN UPDATED: KRIS & WESLEY FINALLY GOT LEGALLY MARRIED (27 Years in the Making)…See below for the beginning of the amazing story back in early 2014…actually, read below ‘A Journey A Love’…to see when it all started back in 1989:

So, an amazing thing has happened…Kris and Wesley are officially getting married!

We are in shock…we just won all-expenses paid wedding for July, 2014! Same-sex marriage was passed into law in the state of New Jersey this past Fall, 2013. With the recent repeal of DOMA (that terrible so-called Defense of Marriage Act), this means we now can have marriage equality on both the state and Federal level. This is huge!

Let me tell you how this all came to be…

We found out about this amazing wedding giveaway contest from a friend. The contest was hosted by Rothweiller Event Design and there were 9 couples who were selected as finalists. To be considered, you were asked to submit your ‘story.’ Danielle Rothweiller, owner of Rothweiller Event Design, along with 11 vendors, including the beautiful Wilshire Grand Hotel in beautiful West Orange, NJ – all read each couple’s story; they viewed a brief video that each couple was also ask to submit…and then each vendor voted on who they felt should win the amazing prize.

On January 9th, at the Wilshire Grand Hotel, the winning couple was announced. And Wesley and I won! We are beyond excited and now preparing for one of the biggest events of 2014! We are submitting our story to Ellen, plus a few reality shows…big things are coming in 2014!!

Here is the story of Kris and Wesley that we submitted…

Kris and Wesley: A Journey of Love

Now, check out the highlights from the unforgettable day!

Click here, or the image below,  for wedding highlights 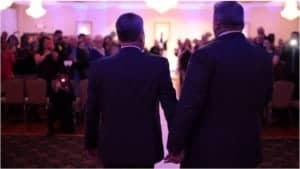