Stampede 66, a culinary love letter to Texas from legendary  Chef Stephan Pyles, opened it’s doors in November, 2012.   Chef Pyles made his indelible mark on the culinary map with his iconic restaurant Star Canyon in the 90s.  A fifth-generation Texan, Pyles is credited with developing and establishing what is known today as The New Texas Cuisine and is truly a founding father of what we all know as Southwestern cuisine.

Pyles’ Stampede 66 is referred to as a Modern Texas Restaurant.  He takes classic Texan/Southern dishes, and puts a modern twist on it.  For example, Wesley ordered Shrimp & Grits…a Loon favorite.   Well, Pyles serves up amazing Texan cultivated Gristmill grits, with traditional sauteed shrimp on top…really incredible just as is.  But Pyles takes it up a few notches, and throws on candied peppers and a sublime butter sauce.  Additionally, he applies a technique referred in the molecular gastronomy world  as reverse spherification, a process in which he takes a deeply flavorful seafood stock made from shrimp heads and tails, and creates a liquid sphere with a gel perimeter…it looks like an egg yolk and sits in the middle of the dish.  Once brought the table, the server gently breaks open the sphere and incorporates it into the shrimp and grits.  Very cool.  See below.

The name ‘Stampede 66′ pays homage to two key places of interest in Pyles’ life.  First, is ‘Stampede,’ which was the name of a dance hall in Big Spring, TX, which is where Pyles grew up.  ‘Stampede’ was one of Pyles’ favorite places to go, and he drew inspiration from it almost every Saturday night.  ’66’ is the name of the truck stop that his parents owned and operated when he was young.  This is where he learned to bake and began his passion for cooking.

Pyles says his vision of Stampede 66 is to bring patrons the ultimate Texan dining experience, but in an entirely new way.  And from our experience, from the moment we entered the restaurant, he delivered on that quest…big time…as big as the Lone Star State itself.

14 local artist’s were used in creating the unforgettable decor.  Famous Texas phrases are projected on the walls.  Actual (and unusual, and quite funny) names of Texas towns are branded on planks of wood and hung on a huge wall (see below).

How about a pig, made out of pig rinds?

A huge oak tree is the centerpiece of the restaurant and is lit to match the time of day.   As the sun sets, the lighting on the ceiling above subtly changes, and resemble the vast Texas sky.  Shadows from the leaves of the tree cast downwards onto the customers dining below.  Really beautiful and amazing.

And then, of course, there is the food.  Shawn Horne, General Manager of Stampede 66, explained to us that every dish that is served in the restaurant is as fresh as possibly can be.   He said he brought a nixtamal machine from Mexico City to the restaurant.  Nixtamalization is the process used (dating back to the Aztec and Mayan civilizations) in creating authentic corn tortillas (for tacos) and tamales.   It is a process in which maize (corn) is soaked and cooked in an alkaline solution and hulled.  This process is what creates truly authentic tacos and tamales.    Shawn says the tortillas used for their tacos, or the tamales, that are brought to your table will never be more than 3 hour old.  Now, that’s fresh.

The fried chicken is brined for 24 hours, soaked in buttermilk, and deep fried to perfection.  And then, as if that wasn’t enough, it’s injected with honey.  Yes, yes. yes.

How about starting with a Texas classic…kicked up a few notches?  Freeto-Chili Pie?  So dang good!

Let’s have some beer bread for the table!  Right out of the Shiner Bock can!!

And now, some dessert!

Stampede 66 is a truly a phenomenal Modern Texas dining experience.  You understand why Chef Pyles is such a celebrated chef and is literally at the top of his game.

He says:  “When I was growing up in Texas, my uncle had a sticker on the back of his Ford pick-up truck that read “Made in Texas, by Texans.”  While I came to believe that was probably not true, I have made every effort to make that slogan a reality through the procurement of ingredients on the menu.”

We can honestly say Chef Pyles’ lives up to that standard with Stampede 66.  It has already become a real Texas legend.   When visiting Big D…you must treat yourself to this gem. 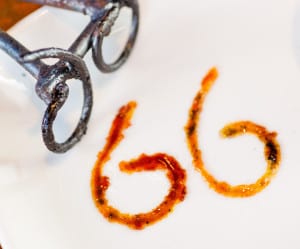 It's Time for BRUNCH!