Chef Ford Fry is, without doubt, one of the most celebrated and cherished chefs in Atlanta, GA.   He has six wildly successful restaurants in the Atlanta metro area that range from Italian, to seafood, to Southern-inspired.   But, it all started back in 2007 with JCT Kitchen, located in the industrial, hip, and cool area known as Westside Urban Market.  It sits right next to bustling railroad tracks, hence its name: “JCT.” 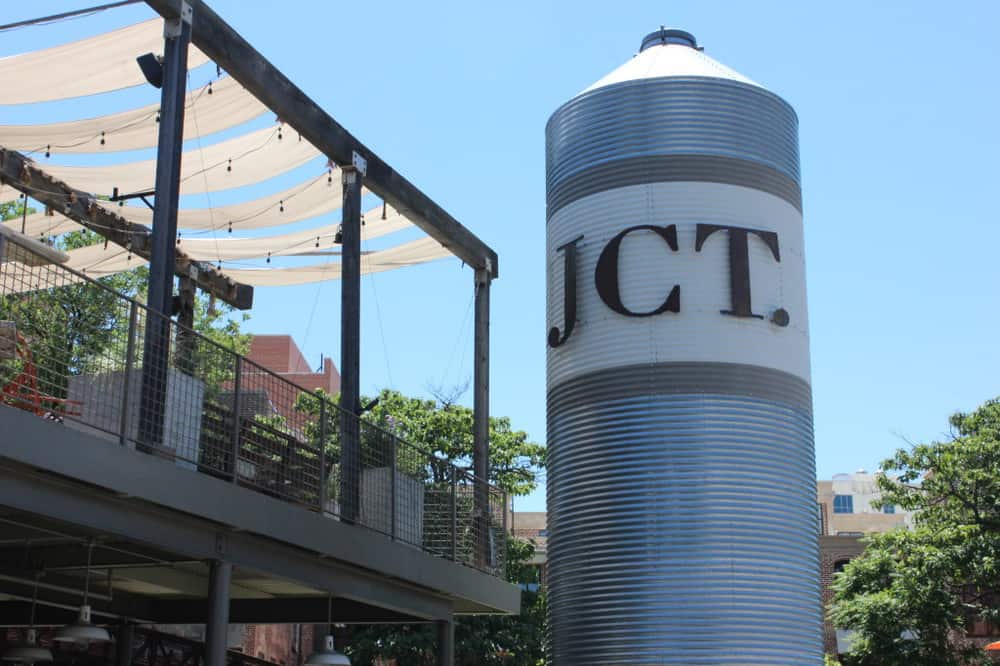 Fry, who landed a spot on the coveted James Beard Foundation’s semi-finalist list of “Outstanding Restaurateur,” creates a restaurant that is truly Southern – but with a distinct French bistro atmosphere.   It is a two-story structure that is open and relaxed, but still very slick and stylish.  You feel the positive energy as soon as you walk in. 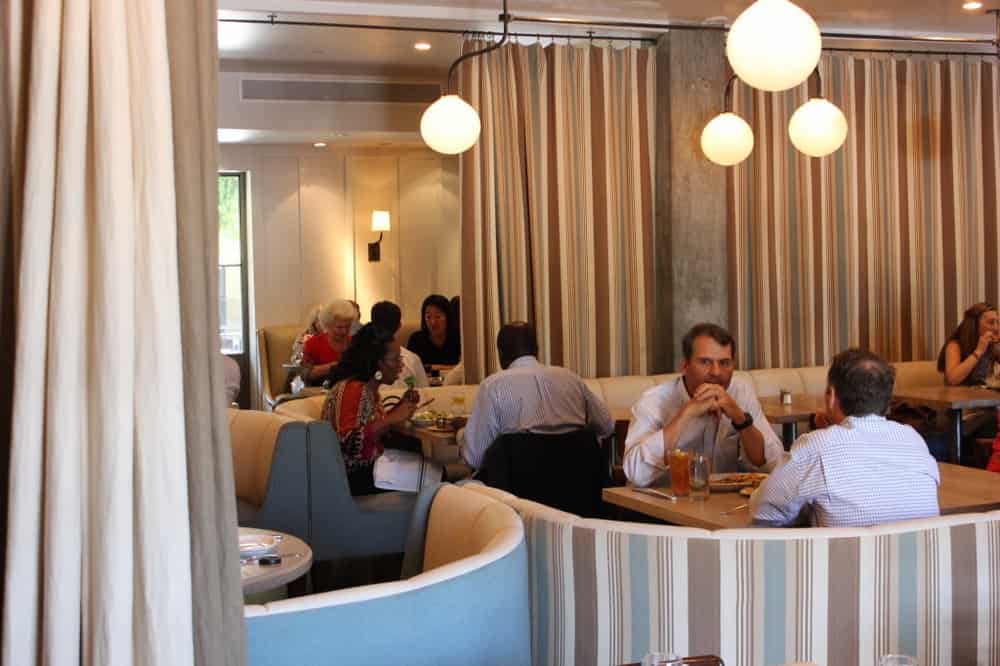 The upstairs is a spacious patio area with an awesome oyster bar, as well as a killer cocktail bar.  Nightly music, a delicious ‘bites’ menu, and a gorgeous view of downtown Atlanta create a hip, yet neighborhood vibe.

Click the short video below to see a look of the upstairs bar area.  We were there on a weekday lunch, so the bar wasn’t bustling with people and music, but you’ll get the idea:

Now, onto the real star of this Southern gem:  the food.  Fry’s culinary vision starts with the best ingredients.  Fry says he and Executive Chef Brian Horn source locally, not only because the food tastes better, but because it allows them to partner closely with suppliers and honor local harvests.  At JCT Kitchen, Chefs Fry and Horn take Southern classic dishes and apply classic European techniques in their preparation.  The result is astoundingly good food.

Sous Chef Scott Bevis explained to us that everything at JCT Kitchen is made on the premises – except for the bread, which comes from an amazing bakery just down the street.

Once comfortably seated, Gloria, our fabulous server, immediately came over and greeted us.  We soon learned that literally everyone associated with JCT Kitchen was very passionate about what Chef Fry had created.  It’s obviously a wonderful dining experience for customers, but it is also a place for those on Fry’s payroll to claim a real stake in the enterprise.   Dishwashers, line cooks, and servers alike have the opportunity to study and build a career as a chef or in restaurant management, all under the auspices of Chef Fry and his restaurants.

Okay…enough talk, let’s really get to the food, the AMAZING food!  We were first brought a beautiful plate of freshly made corn muffins with a side of softened Serrano pepper butter.  After smearing a good helping of the luxurious butter on the right-out-of-the-oven muffin, we took a bite.  Wow.  It’s the perfect blend of savory with a touch of sweetness.  If this was any indication of what was still yet to come, we were getting giddy with excitement. 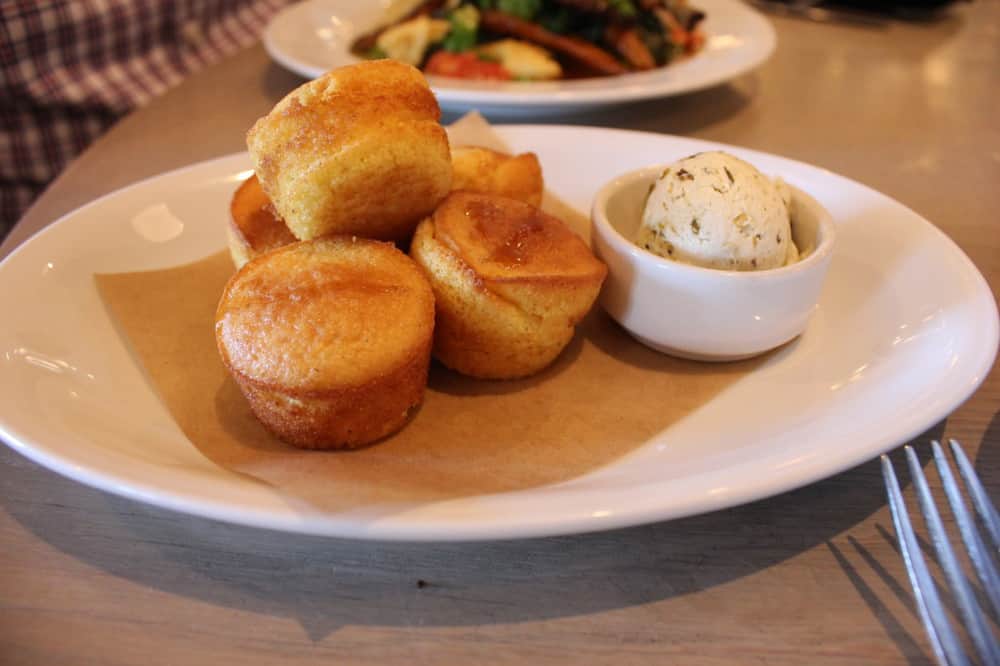 I mentioned we were getting giddy.  That was true, but also because Gloria had brought over one of JCT Kitchen’s signature cocktails…a refreshing JC Tea.  This lovely libation concoction consisted of Grand Marnier, Iced Tea-Infused Gin, fresh lemon juice, simple syrup and Regan’s orange bitters.   Oh, yes!  So refreshing and so delicious! 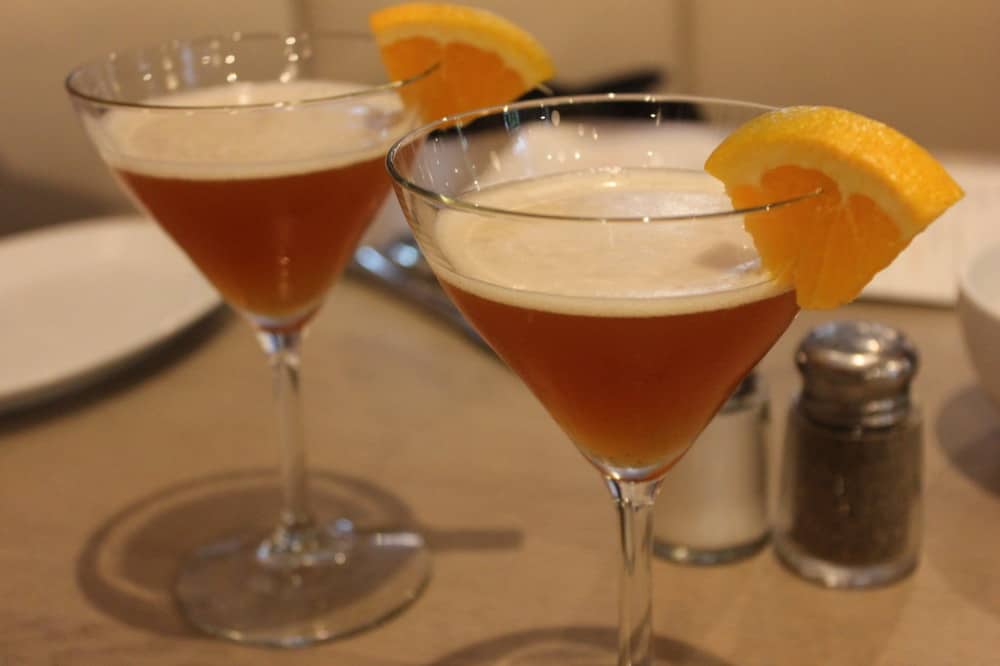 Next came one of JCT’s most popular dishes:  The Angry Mussels!  First of all, these were the biggest mussels we’ve ever seen, and believe me, we’ve seen some pretty big mussels over the years (but that’s a different story).  These babies are gently cooked in a savory white wine sauce, along with house-cured bacon,  serrano chiles, and onions – served with thick slices of buttery, toasted bread for sopping up the goodness.   These Angry, but devilishly good guys, were even featured on Food Network’s “Best Thing I Ever Ate.”  After one bite, we understood why. 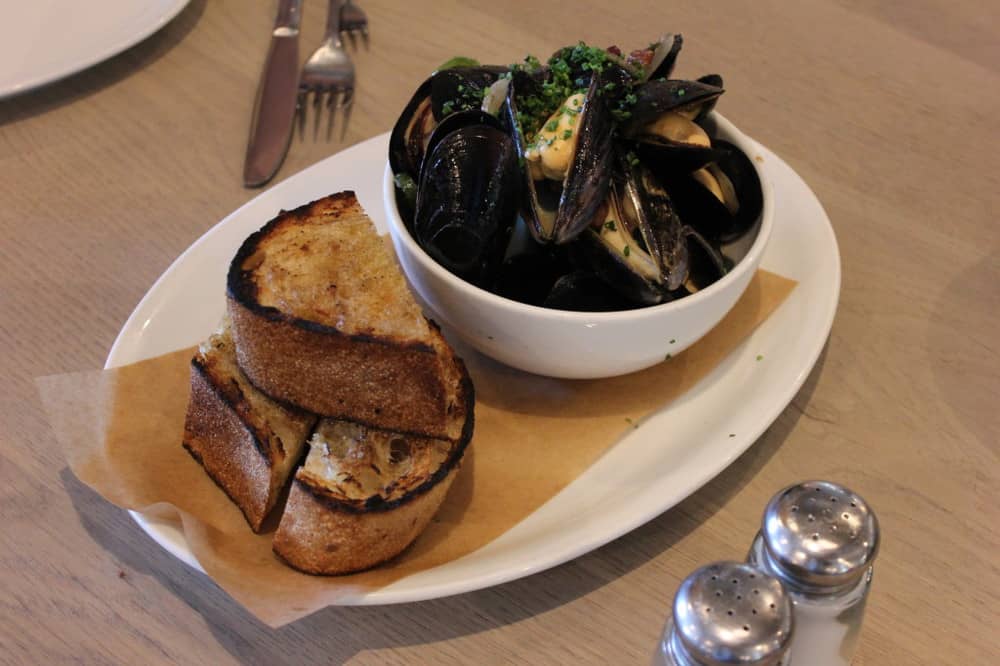 Alright, time to bring out the big guns.    Both the Loon and I went for JCT Classics.   The Loon had to go with their legendary fried chicken.   They start brining the chicken 16 hours before service.   Then the chicken is soaked in buttermilk, dredged in a secret seasoned flour, and eventually fried to crispy golden perfection in a large cast iron skillet.   It was served with wonderful slow-cooked collard greens and house-made hot sauce. Absolutely incredible. 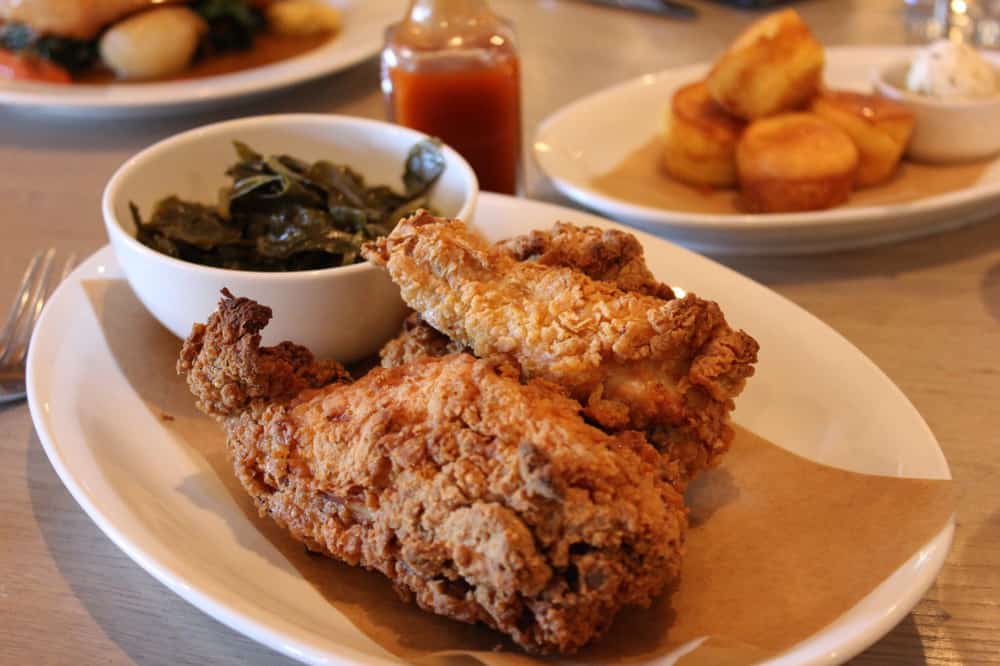 Both Gloria and Sous Chef Scott told us of a guiding principle at Fry’s restaurants which was to not waste food.  This also fit in with the idea of using the freshest ingredients and their commitment to the “farm to table” mantra.  Everyday, the chefs study the books and look at weekly, monthly and seasonal trends to predict the number of customers on a given day.  Then, just enough food is prepped to fulfill the estimated customer count. Their philosophy is that it’s better to run out of a dish, than to have food left-over.   Both the Loon and I agreed this was an important philosophy to adhere to.

Now…my main dish.  Oh man, you gotta try this: JCT’s  “Chicken and Dumplings.”  On the menu, it’s printed in quotation marks because it is not your traditional chicken and dumplings.  It is what many refer to as a ‘deconstructed’ chicken and dumplings dish.  The star of the plate is a whole chicken leg that has been brined overnight, and then slow cooked for several hours until the meat is fall-off-the-bone tender.  It is served with homemade butter dumplings, and sauteed seasonal vegetables of the moment – on my plate were peas, broccoli, glazed carrots and tomatoes…exploding with freshness and incredible taste.  All resting in a lush, deeply flavored brown sauce.  Oh. My. God. 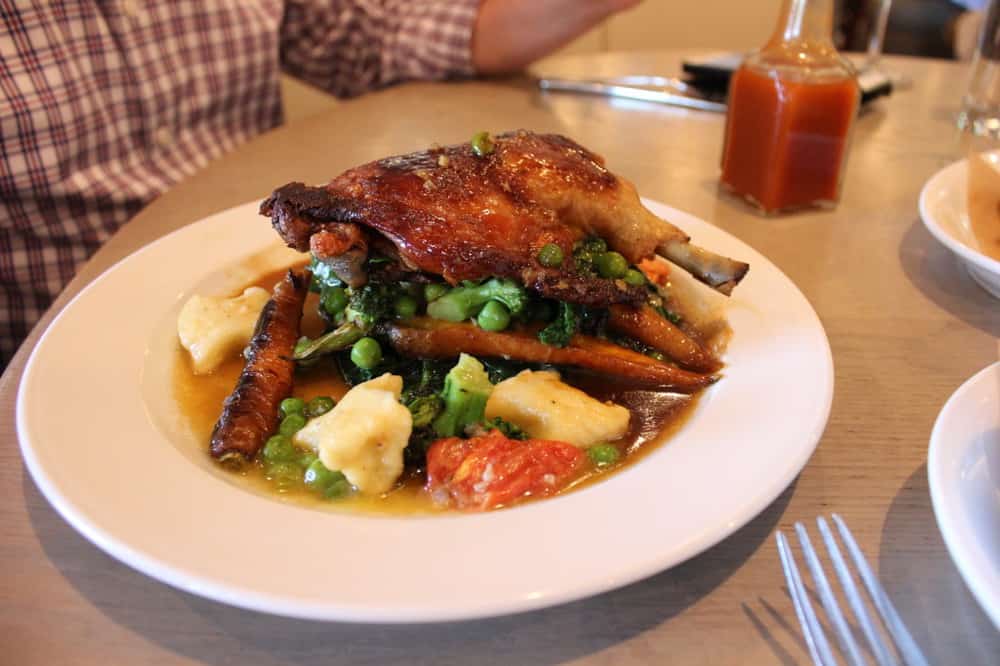 This food is transcendent.   It takes you to another place, but also begs you to return again, and again.  Finally, the Loon and I split the legendary dessert dish that has stayed on the menu from day 1:  Rum Slopped Coconut Cake.   Gloria said everything, of course, on the dessert menu was over-the-top good, but…since we had never had the Rum Slopped Coconut Cake, we needed to try it.   Gloria had brilliantly guided us through the delectable lunch thus far, we weren’t about to doubt her judgement now.

I present you the Rum Slopped Coconut Cake.  An amazing light and delicious white sponge cake, covered in freshly toasted coconut and whipped cream, and, naturally, soaked in rum.  Surprisingly, and happily, the rum didn’t overpower the cake, and somehow perfectly complimented the coconut, cream, and airy cake.  Divine. 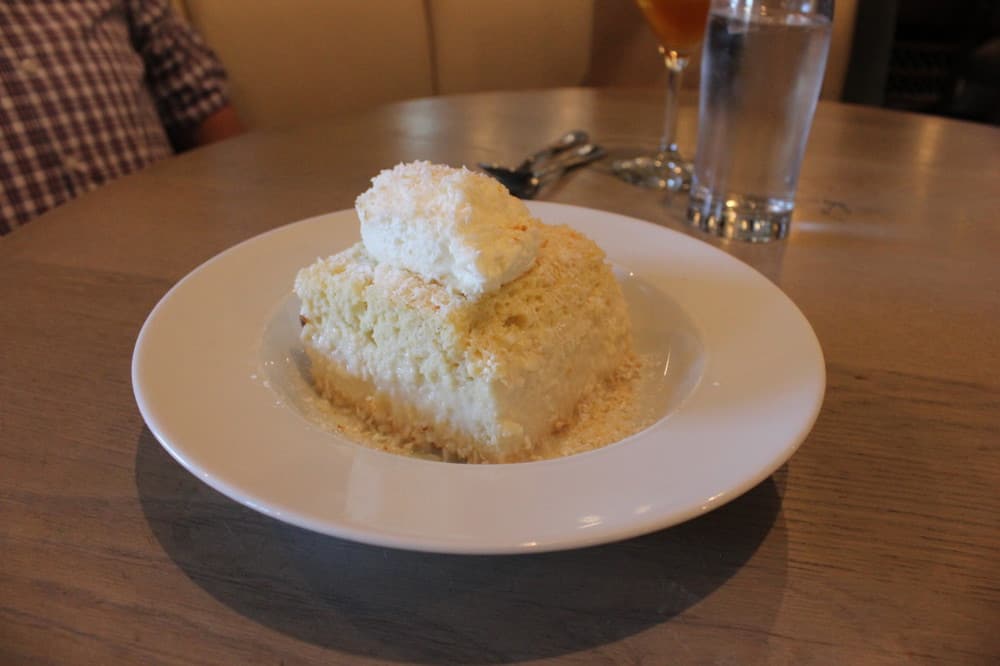 Our dining experience at JCT Kitchen was absolutely top-notch.  Exquisite Southern Cuisine meets French Bistro – just amazing.  Chef Fry says  “I want to create restaurants that strike a timeless emotional chord – restaurants that don’t pander to trend, but draw generations of families together.”   Well, I can guarantee you one thing, next time we’re in Atlanta – we’ll be returning to a Ford Fry restaurant, and quite likely, JCT Kitchen will be on the list.   Next time you find yourself in Atlanta…give yourself a treat and go to JCT Kitchen.  You’ll be very glad you did.